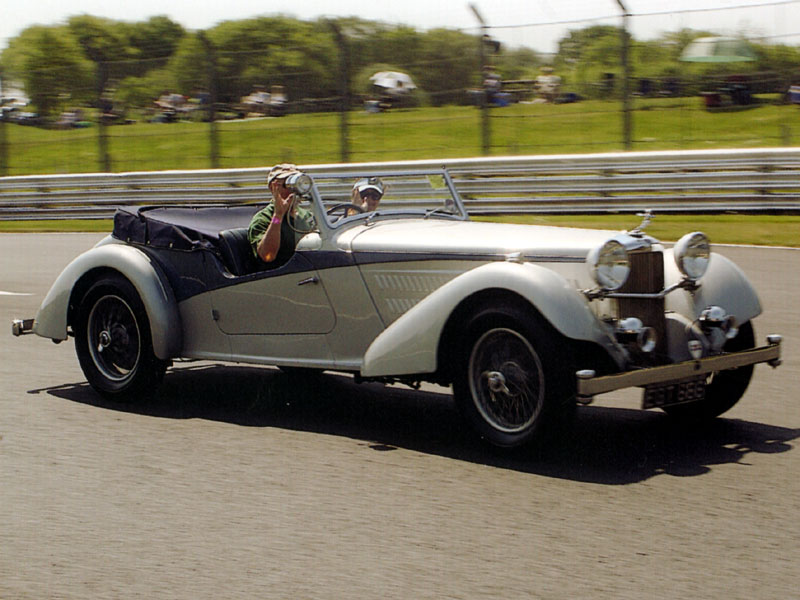 This imperious-looking example began life as a Charlesworth Speed Saloon and was despatched to Henlys, London on May 3rd 1937. Judging from the accompanying continuation buff logbook, it would seem to have been in 1966 that the Alvis was rebodied as a lightweight four-seater (prior to racing at Silverstone and elsewhere). The car has remained in the current family ownership since August 1989, and it was during the mid '90s that the vendor's late husband commissioned Simon Isles of Pott Shrigley to replace the competition body with one modelled on the coachwork fitted to the short chassis 4.3-litre cars by Vanden Plas.

'EGT 686' seemingly boasts the same engine listed on its copy factory build sheet; the straight-six unit being thoroughly overhauled by Walkers Radiators (specialists in the restoration of the Alvis and Austin-Healey marques) during 2003. Previous known owners include: Carl Athestan Smith of Dudley (13th January 1958 - 4th June 1965), Michael Bishop of Dudley (4th June 1965 - ?) and Courtenay Forbes Warner of Wilby Hall, Quidenham, Norwich, who sold it for £48,000 in 1989. The Alvis has been employed on a trip to the Isle of Man and several of the Lagonda Club's Fougeres rallies to France, and has won the following awards: Tatton Park Vintage & Classic Show - 3rd in the best pre-1950 sports car class (2001) and Tatton Park Vintage & Classic Show - Best Alvis (2007).

This splendid Silver over Blue Speed 25SB is being sold complete with continuation buff logbook, assorted MOTs going back to 1987, various bills, Alvis owner's Club handbook, other marque literature and an MOT valid into April 2013.
Share this page: