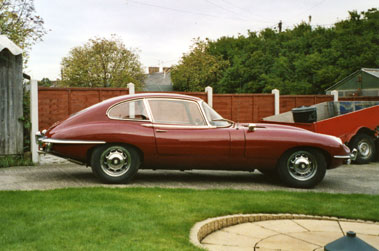 Introduced in 1969, the Jaguar E-type Series II could be had in Roadster, Fixed Head Coupe or Fixed Head Coupe 2+2 guises. Known in America as the XKE Family Coupe or XKE Sedan, this latter variant had a notably spacious feel thanks to its elongated wheelbase, raised roofline and larger glasshouse. Equipped with a pair of foldable rear seats, it otherwise benefited from the same fully independent (torsion-bar front / coil-sprung rear) suspension, rack and pinion steering and disc brakes as its two-seater siblings. Powered by a 4235cc DOHC straight-six engine developing a quoted 265bhp and 283lbft of torque on triple SU carburettors (or 246bhp on twin Strombergs), it could be had with a choice of four-speed manual or three-speed automatic transmission. Only in production for a couple of seasons, it nevertheless managed to outsell its two-seater equivalent (approximately 5326 vs 4855) and thus helped convince Jaguar to adopt its basic platform architecture for the forthcoming Series III cars.

Finished in Regency Red with black leather upholstery, this particular example is variously described by the vendor as being in "good" (electrical equipment, chassis, bodywork), "very good" (engine, four-speed manual gearbox) or "original / decent" (interior trim) condition. Though, he considers that the paintwork is "in need of a revamp" and the wheels / tyres "need checking due to age". Reportedly the subject of a four-year restoration soon after entering the current ownership in 1988, 'PAK 839H' is understood to have benefited from a refurbished back axle (new bearings, discs etc), engine overhaul (reground crankshaft, new pistons, timing chains, clutch, carburettors, unleaded cylinder head) and rejuvenated ancillaries (radiator, alternator, starter). While, bodily the E-type was apparently treated to "a new bonnet, boot floor, inner wheel arches, sills and outer rear wheel arch repair kit". Believed but not warranted to have covered just 76,000 miles from new (with only 5,000 of those being accumulated during the last fifteen years), more recent work has included the installation of "new front brake callipers". Riding on steel wheels, this practical yet elegant Jaguar coupe is offered for sale with MOT certificate valid until September 13th 2007 and historic class (free) road tax until July 31st 2007.