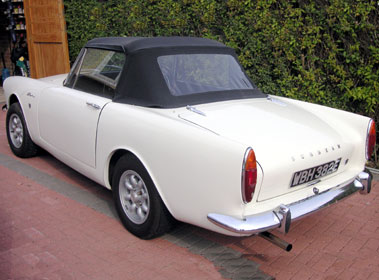 "In the Alpine the needs of the sporting motorist with a young family are met. It is attractive, safe and unquestionably fast in spite of the emphasis put on long distance comfort. The world's markets are overdue such a car". (Autocar 1959)

Introduced in 1959, the Sunbeam Alpine was a natural rival to cars such as the MGA and Triumph TR3. Built around a steel monocoque, it featured independent coil-sprung front suspension, a 'live' rear axle and disc / drum brakes. An attractive design, its lines were predominantly the responsibility of Kenneth Howes. Swindon born, this former employee of Ford' Detroit Styling Centre had also been schooled under Raymond Loewy. As such, the Alpine's 'micro Thunderbird' profile was perhaps little coincidence. Unveiled in 1965, the final MKV variant was equipped with the Rootes Group's latest four-cylinder engine - a five-bearing crankshaft 1725cc unit rated at 92.5bhp - which proved notably more powerful and refined than its predecessors. Further benefiting from the adoption of negative earth electrics and an alternator, the newcomer was reputedly capable of over 100mph. Treated to some subtle internal / external cosmetic tweaking as well, it emerged boasting a crisper more modern look. Only produced for three years, the Alpine MKV was quietly dropped from the Sunbeam range in 1968.

Finished in white with black upholstery, this particular example is described by the vendor as being in "good" condition with regard to its engine, four-speed manual plus overdrive gearbox, electrical equipment and bodywork, while he considers the interior trim to be "usable" and the paintwork "excellent apart from a few stone chips". The seller goes on to say that: "The Alpine has an extensive history file with many MOTs and tax discs going back more than thirty years. There is an abundance of paperwork, documents and receipts as well as owners' club information. The car has clearly been cherished by its previous owners and comes with its original green logbook from Buckinghamshire where it was first registered on 15th June 1967. Also included is the invoice from the last owner who kept the car for over three years and sold it only to finance the purchase of a Sunbeam Tiger".