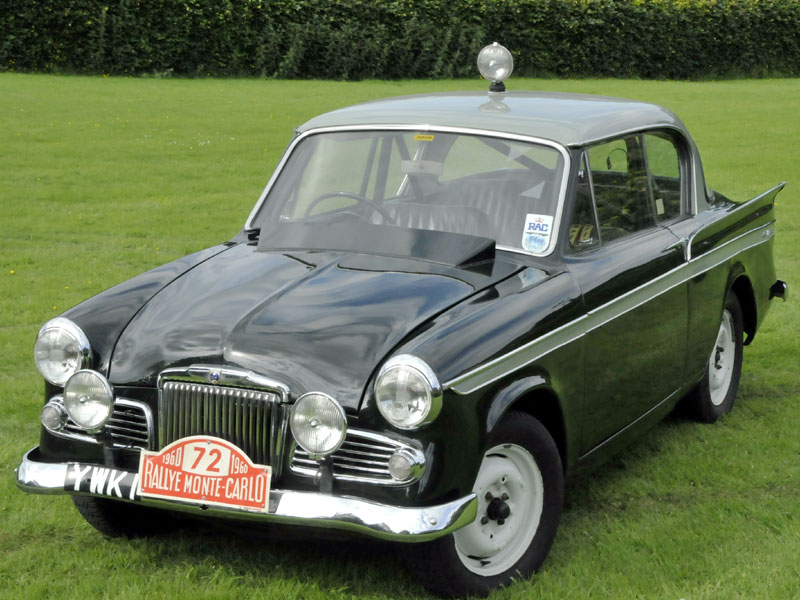 When the Sunbeam Rapier was introduced in 1955, it was not yet a competitive rally car, but serious and detailed development work by the factory team soon changed all that. Within a year the 'Works' cars were performing with honour in the Mille Miglia, Peter Harper won the RAC rally of 1958 in a 'Works' Rapier, and the cars became successful in events such as the Monte Carlo and French Alpine rallies.

The original Rapier was a 1.4-litre two-door hardtop coupe, based on the same platform of the Hillman Minx of the period, but regular updates saw it given a 1.5-litre, a 1.6-litre and finally a 1.7-litre engine, along with front-wheel disc brakes and other refinements. The Series II cars ran in 1958 and 1959, but from the autumn of 1959 the Series III variant took over, with an aluminium cylinder head, a 73bhp / 1494cc engine, and a top speed of around 90mph. Laycock overdrive was an optional extra, most cars being sold with that feature included.

Because the 'Works' rally team, led by Norman Garrad, commissioned new cars as soon as the latest specification was available, it followed that five brand-new Series III types - registered 'YWK 1' to 'YWK 5' respectively - were made ready for use in 1960. Although these invariably ran in FIA 'standard' Group 1 condition, the 'Works' team cars were not only stronger, but handled better, and produced significantly more power, than the showroom variety. Overdrive was always fitted and, depending on the regulations for a particular event, this was sometimes arranged to operate on all forward gears.

Along with its four sister cars, 'YWK 1' was built at Ryton-on-Dunsmore, Coventry, late in 1959, then prepared for the 1960 Monte Carlo rally, where it was piloted by race drivers Peter Jopp and Les Leston, but had to retire with a broken half shaft. The same car and crew then tackled the Greek Acropolis rally, where they once again had to retire.

'YWK 1' was then sold off by the 'Works' team, and was bought by Oakham-based Rootes dealer Julian Easten. Along with co-driver Graham Robson, this private team then contested many British events, their successes including membership of the winning club team in the RAC rally, second overall in the 1961 Welsh rally, along with victories in several Motoring News Championship events of the 1960-1961 winter. When Julian purchased a Sebring Sprite from John Sprinzel, 'YWK 1' was sold through that well-known outlet.

'Works' Rapiers of this type were always sturdy, and carefully built to last the toughest of campaigns. Neither in 'Works' ownership, nor in that of Julian Easten, did 'YWK 1' suffer any significant damage in accidents. However, later in the 1960s, with rallies changing so completely in type and character, 'YWK 1' was retired from motorsport, but re-appeared when classic rallying blossomed in the 1980s.

As offered for sale, 'YWK 1' combines originality (including its green paint and green interior trim, with rally plates from the 1960 Monte Carlo rally) with a series of improvements made for modern classic rallies. The engine fitted is now a Series IIIA type of 1592cc and there is a full roll cage, and Britax full harness safety belts. When the car was new, in fact, the use of a roll cage was strictly forbidden. The roof-mounted Lucas swivel spot lamp is as used by the factory at the time, while the colour scheme and the position of the registration number on the front bumper is totally authentic. The car is fitted with a rare, and valuable, example of the Halda Speed Pilot, which computes distances and average speeds by a cable drive from the speedometer.

Since entering the current ownership via our February 2004 Race Retro auction, 'YWK 1' has been dry stored, and is offered complete with old style FIA papers appropriate to its former use in classic rallying. It is thought to be the only ex-Works 'YWK' car to survive, and indeed to be the only survivor of eight Series III Rapiers used by the 'Works' team in 1960.
Share this page: