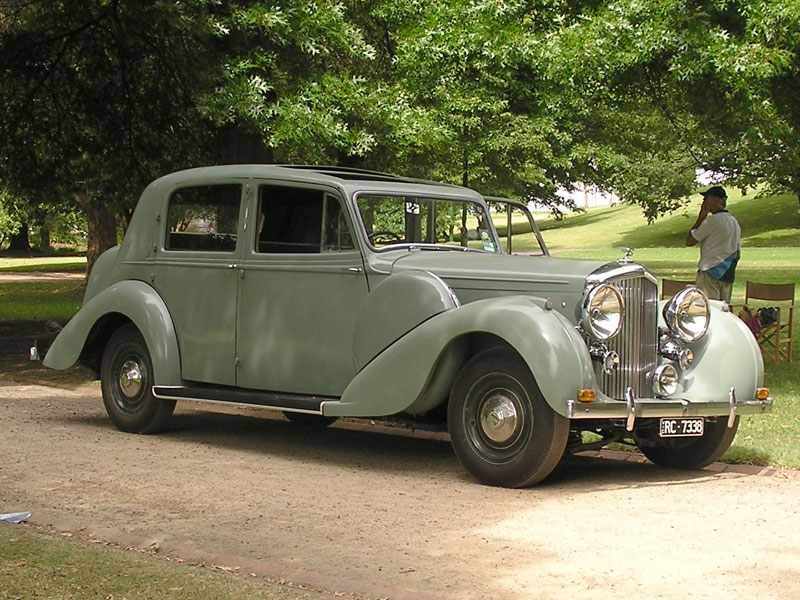 
Lot details
Registration No: Un-Reg
Chassis No: 3B50
Mot Expiry: None

In 1939, when production of its new Mark V Bentley model had begun, Rolls-Royce embarked upon a programme of engine rationalisation that allowed for just three types of powerplant - the four cylinder B40, six-cylinder B60 and eight-cylinder B80. Rolling test beds were required, for which four MKV chassis were laid down and their wheelbases extended by 4 inches so a division could be included in the specification. Each was bodied by Park Ward and the first three fitted with B60 engines, while the fourth received a B80 one. The sale car, chassis number 3B50, was a member of this experimental quartet and received B60 engine No.11.

Each car was allocated a log book in which every mechanical change, test drive, name of driver, weather conditions etc had to be recorded, the originals of which are these days in the hands of the RREC. The main focus of the early driving was to optimise engine performance on the poor quality fuel of the time. Different types of carburettor and sparking plugs were explored, as were changes in valve clearance, engine timing and compression ratio, and even different cylinder heads. At the outbreak of war, car production ceased and the four experimental cars were transferred to the transport pool for general duties. The log books were kept up to date throughout this period, and that of 3B50 shows it was at one stage lent to the head of Bomber Command Air Vice-Marshall Sir Arthur Harris. By the time peace had resumed, the company had moved onto the MKVI model and the experimental cars became surplus to requirements, and 3B50 was sold to W A Robotham; a former director of Bentley Motors who knew the car well.

There is then a gap in the Bentley's history until it was found abandoned in a parking lot by automotive author Michael Elman-Brown. He managed to trace the owner who had apparently been intent on breaking it for spares, but was persuaded to sell it to Elman-Brown for £20. The motorcar was apparently in a bad way, but returned to roadworthy condition by Barley Mow Engineering - sufficient for Elman-Brown to use it for a couple of years before selling the car through P&A Wood. By the time the vendor acquired 3B50, it was once more in a very sorry state, following more than 200,000 miles of service - 11 years worth of which were in punishing test conditions. Evidently the body frame was rotten, there was considerable corrosion to the panelwork and the mechanical parts were notably worn. However, it was deemed to be very much as sold by Bentley, and complete apart from the bonnet mascot, Lucas horns and spot lamp. Determined to bring this historic motorcar back to life, the vendor took it with him to Australia in 1976 and has "been working on it, on and off, ever since".

He says the restoration has been fairly straightforward though, as an engineer by trade, he's had to learn woodworking, body building, wiring, panel beating, spray painting etc along the way. Parts such as roller bearings, engine main bearings and suitable gasket sets were all obtainable in Australia. The replacement of a broken exhaust valve spring proved more troublesome, but was resolved by a Melbourne-based company who manufacture such parts in volume for Ford and took time out to produce a perfect set to the highest industry standards. He also sought help with replacing the corroded areas of the aluminium wings - a job that was entrusted to specialist aircraft welders at a local airport. In his own words: "I then had to put it all back together again. I wouldn't suggest I have made a perfect job, not having had years of experience coachbuilding, but I have put it back in running order, not changing but repairing what was there. I have tried to restore it so it looks like a reasonably well kept 1939 car, such that if Robotham or any of the test drivers looked out of the factory window and saw it in the car park they would recognise it easily."

Repatriated last year, this fascinating and historically important Bentley is thought to be the only survivor of the four B50 experimental cars made, and is now considered by the owner to have "fair" bodywork, paintwork, 4256cc engine and four-speed manual gearbox, and "1939 - poor condition" leather trim. A unique opportunity for all Derby Bentley enthusiasts.
Share: