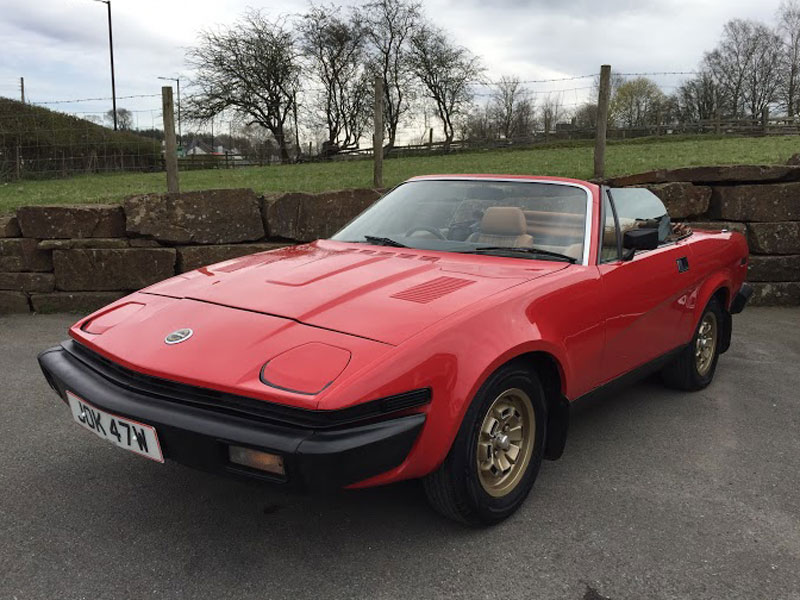 
The Harris Mann-penned TR7 was a major departure from the original TR line, which had steadily evolved from the TR2 of 1953. Its overtly wedge-shaped monocoque body was initially only available in Coupe guise, the Convertible not being launched until 1980. Power came from a front-mounted 1998cc four-cylinder engine that was effectively an 8-valve version of the Dolomite Sprint unit. Its output was 105bhp - enough to accelerate the newcomer to 60mph in 9.6 seconds and on to around 112mph. Suspension was by MacPherson struts and coil springs at the front and a live axle and coil springs at the rear, while braking was by discs/drums and steering by rack and pinion. This 1981 TR7 has been owned by husband and wife Triumph enthusiasts since 1991. It is pleasingly presented in the combination of Red bodywork, Beige plaid upholstery, Beige hood, and Gold-coloured alloy wheels. It has just been treated to four new tyres and is being offered complete with the original handbook in Green Triumph wallet, previous maintenance invoices and MOTs, and one valid to April 8 next year. The vendor informs us that 'JOK 47W' 'drives very well'. The TR7's odometer currently stands at an unwarranted 87,000 miles.
Share: