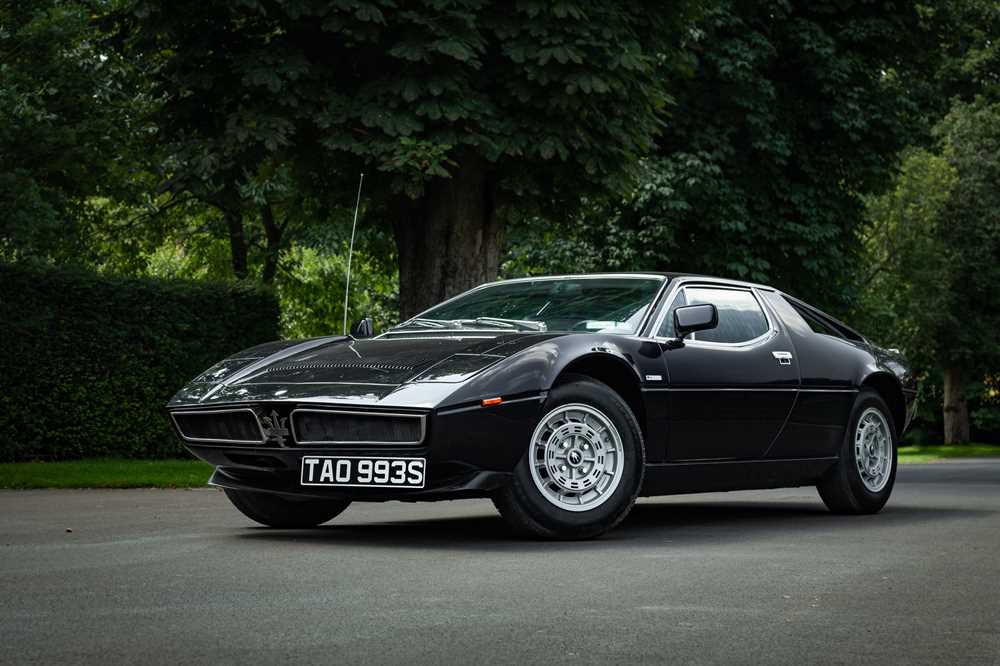 Manufactured in January 1978 and supplied new to America, chassis 2288 is understood to be one of just 312 Merak SS cars to be fitted with the ‘Bora dashboard’. Resident in New York State for a time, the 2+2-seater was imported to the UK by the vendor during 2020. Unhappy with the car’s aesthetics, he had it repainted from Silver to Maserati Dark Blue metallic and the cumbersome ‘5mph impact’ bumpers replaced with chrome Bora ones. Looking decidedly cleaner as a result, ‘TAO 993S’ has had its appearance further enhanced with discrete LED indicators and running lights. The Black leather upholstery was thoroughly cleaned and is complemented by new carpets and hard to find Maserati floor mats. Mechanically checked over and serviced, chassis 2288 pleasingly retains its factory-fitted powerplant which sits within a beautifully detailed engine bay. Commenting that this stunning Merak SS ‘runs and drives as you would expect’, the vendor adds that it represents ‘an opportunity to drive away in a superb, matching numbers car’

Introduced at the October 1972 Paris Motor Show, the Maserati Merak (Tipo 122) was intended to rival the Ferrari Dino 246 and Lamborghini Urraco. Named after a star from the Ursa Major constellation, the compact 2+2 sportscar's styling deliberately aped that of its Bora supercar sibling (both models being penned by Giorgetto Giugiaro). Based around a steel monocoque chassis equipped with all-round independent double-wishbone suspension, four-wheel ventilated disc brakes and rack and pinion steering, the Merak was powered by a longitudinally-mounted 'quad-cam' 2965cc V6 allied to a five-speed transaxle gearbox. Fed by triple Weber carburettors, the engine was credited with 190bhp and 188lbft of torque. Debuting at the 1975 Geneva Salon, the uprated SS variant not only boasted more power and torque (up to 217bhp/199lbft) but also a lower kerbweight. As such, the ‘Super Sport’ was reputedly capable of 0-60mph in 7.5 seconds and 155mph. Praised by the contemporary motoring press with Motor magazine observing that: 'Performance and handling are the raison d'être of a mid-engined sports car, and the Merak's astounding cornering power is a match for its straight-line punch,' the diminutive Maserati remained on the market until 1983 by which time some 1,817 examples had been made (including 970 SS variants).