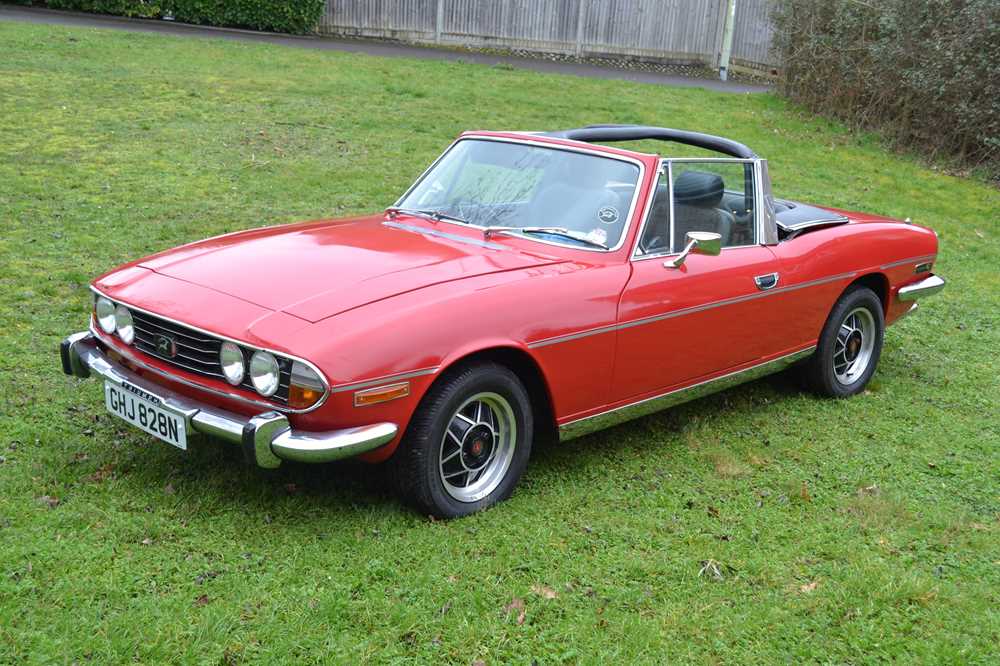 Introduced in June 1970, the Triumph Stag was conceived as a luxury convertible sportscar to rival the likes of the R107-series Mercedes-Benz SL. As such, it came equipped with electric windows, power-assisted rack and pinion steering and servo-backed disc / drum brakes as standard. Based around a two-door monocoque bodyshell (stylist Giovanni Michelotti had physically shortened a pre-production Triumph 2000 saloon to fashion the initial prototype), the newcomer featured all-round independent suspension (McPherson strut front / semi-trailing arm rear) and a well laid-out 2+2 cabin. Neatly integrated, the substantial roll-over hoop that joined the B-pillars gained extra strength from a T-bar link to the windscreen frame.

The example offered was manufactured in 1974 and was first UK registered in November that year. Fitted with the original 2997cc Triumph V8 engine mated to the automatic gearbox, this example is finished in the popular Stag colour combination of red with black vinyl upholstery, although the car has been subject to a colour change from its previous white at some stage of its life. The stag has a recorded mileage of 16,685 and twelve former keepers.

Entering current ownership in 2017, the Stag was comprehensively refurbished in 2018 consisting of suspension and brake overhaul, body refurbishment including replacement valances and front panel. The engine was overhauled including new valve seats for unleaded fuel; revised cooling system; electronic ignition; carburettor refurbishment; new hoses; and stainless-steel exhaust system. The interior was rejuvenated with new seat bolsters and linings and the Stag received refurbished wheels shod with new tyres. Offered with a collection of invoices relating to the works completed and totalling approximately £4,000, as well a current V5C.