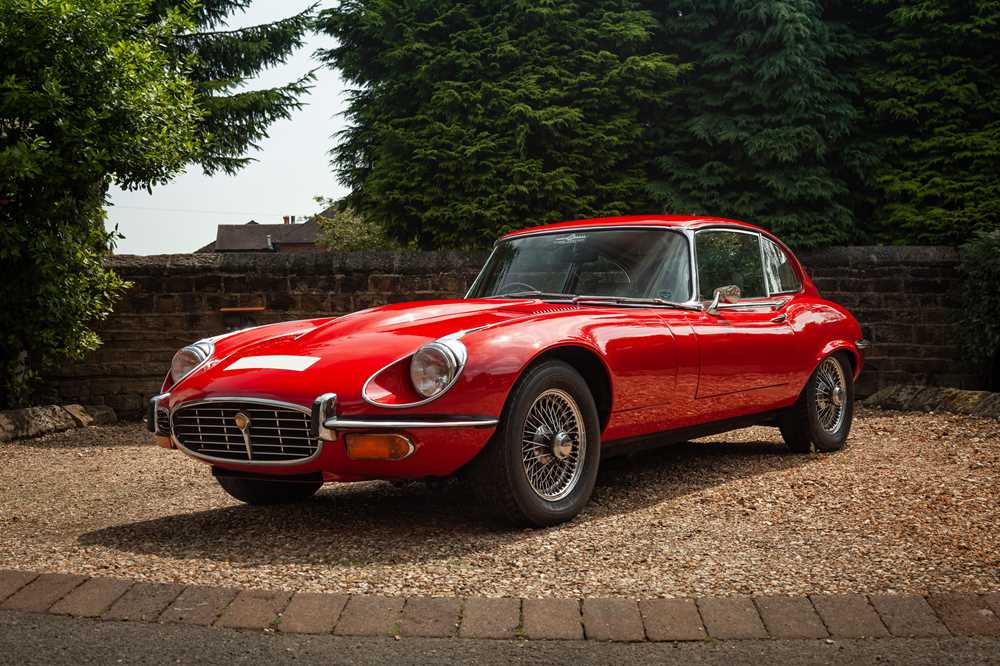 Supplied new to America, chassis 1S74837 is understood to have covered just 18,000 miles in the hands of one Floridian owner before being repatriated during 1989. First UK road registered as ‘2 EXH’, the Jaguar was still showing a mere 19,000 miles when it appeared at an H&H Buxton auction in 1997. Sadly, the corroborating paperwork has been lost over time but the substantially original interior is consistent with a low mileage car that has spent time in a hot climate. The Cinnamon leather remains presentable aside from a small tear in the driver’s seat. Repainted from Sable to Red at some stage (most likely when it first came to Britain and was converted to right-hand drive), the E-Type has self-evidently been the subject of past restoration work. Starting readily upon inspection, the 2+2-seater shows a highly credible but unwarranted 36,000 miles to its odometer. Riding on chrome wire wheels, it is rated by the vendor as being in ‘good’ (engine, interior trim) or ‘very good’ (bodywork, paintwork, automatic transmission, electrical equipment) condition. Offered for sale with Jaguar Heritage Trust Certificate, V5C Registration Document, sundry paperwork and fitted indoor car cover.

Last, of the line, the Jaguar E-type Series III was introduced in 1971. Longer, wider and more comfortable than its predecessors, the newcomer blurred the lines between sports car and grand tourer. Powered by a turbine-smooth all-alloy SOHC 5343cc V12 engine allied to either Jaguar four-speed manual or Borg-Warner three-speed automatic transmission, the refined manner in which it performed (contemporary road tests spoke of 0-60mph in 6.4 seconds and 150mph) simply blew road testers away. Benefiting from a broader track, ventilated disc brakes, power-assisted rack and pinion steering and Lucas transistorized ignition, the Series III was visually distinguished by its 'egg-crate grille, flared wheel arches and purposeful quad-exhaust pipes. Available in fixed-head coupe (2+2-seater) or roadster (2-seater) guises, it remained in volume production until 1974 (though, a special commemorative run of forty-nine black-painted roadsters was released the following year).