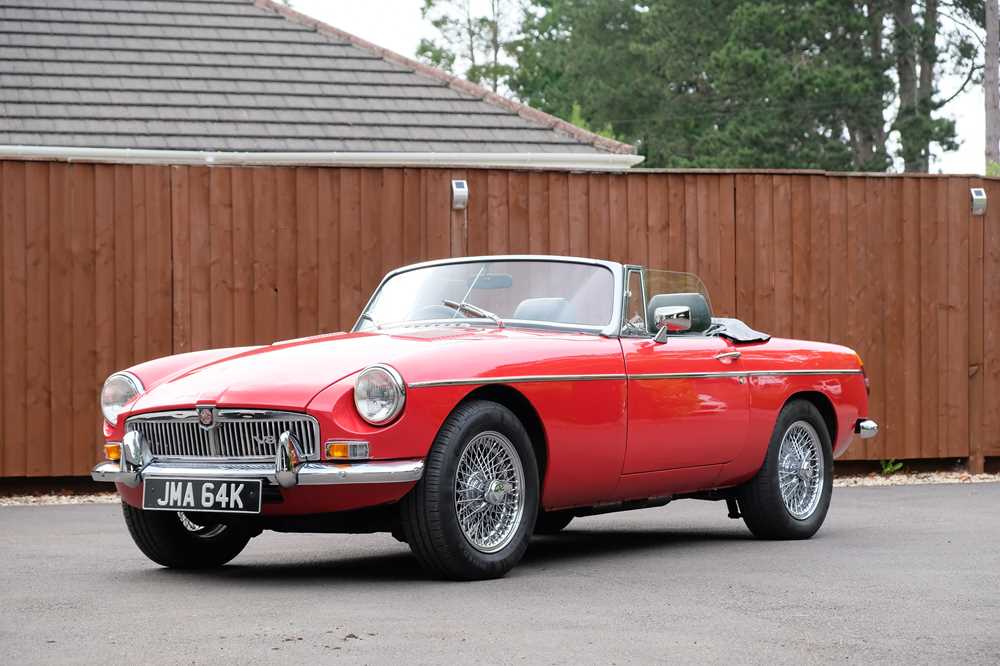 Introduced in 1962, the MGB Roadster enjoyed an eighteen-year production run. With nicely balanced handling and a good turn of speed, it merited the old MG marketing slogan 'Safety Fast'. Based around a monocoque chassis featuring independent coil-sprung front suspension and a leaf-sprung 'live' rear axle, its 1798cc 'B' series four-cylinder engine was allied to four-speed manual transmission. Capable of over 100mph, the provision of front disc brakes and rack-and-pinion steering greatly aided control.

Registered in 1972, JMA 64k is presented in Tartan Red with contrasting black interior and is a highly sought after V8 conversion based on a heritage shell. The car features a 3.5L Rover V8 With 5spd gearbox that was included as part of an extensive restoration between 1992 and 1994 at a total cost of nearly £21,000, with just 12,502 miles having been covered since.

JMA 64K was acquired by its current custodian in February of 2018 and has since been subject to over £7,600 of expenditure, including polybushed suspension with parabolic springs, aluminium re-cored radiator with larger cooling fan, overhauled carbs, a partial engine overhaul inc. skimmed heads and replacement camshafts, a gearbox overhaul, replacement steering rack, electric adjustable power steering and much more. The vendor rates the condition of the Bodywork, engine, electrical equipment, paintwork, transmission and interior trim al as ‘’Very Good’

JMA 64K comes accompanied by its v5 document, as well as a number of receipts and invoices for the restoration work and work since its current ownership.