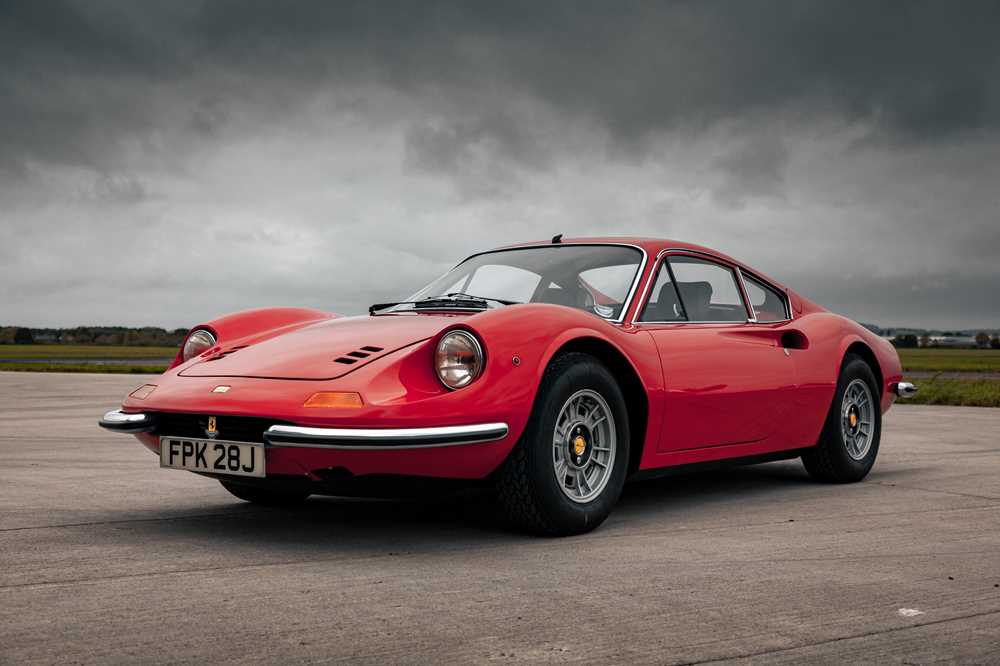 Heavily influenced by the Dino 206 GT Berlinetta Speciale concept car (a thinly disguised 206 S sports racer) which Pininfarina had unveiled at the 1965 Paris Salon, the roadgoing Dino 206 GT debuted in Turin two years later. Compellingly curvaceous and bodied in aluminium over a tubular steel chassis frame, it seemed a fitting tribute to Enzo Ferrari's late beloved son Alfredino. Boasting all-round, independent double-wishbone suspension, Koni shock absorbers, anti-roll bars and four-wheel disc brakes, the newcomer was the first Maranello production design to feature either rack-and-pinion steering or a mid-mounted engine. Although, the 1987cc 'quad-cam' unit in question was the work of Franco Rocchi, its inspiration came via Alfredino and the legendary Vittorio Jano (who between them had convinced Enzo Ferrari of the inherent engineering merits behind a compact V6 as early as 1956). Developing a quoted 180bhp at 8,000rpm, the free-revving powerplant was allied to five-speed manual transmission and promised a 140mph plus top speed.

However, despite sensational looks and inspired, race-bred handling, the announcement of an even faster variant at the March 1969 Geneva Motor Show saw 206 GT production cease in August 1969 after just 152 cars. Thankfully, its successor - christened the 246 GT on account of its larger 2418cc engine - retained the same sublime Pininfarina styling (albeit draped over a 60mm longer wheelbase). With a quoted 195bhp and 166lbft of torque on tap, it was reputedly capable of 151mph and 0-60mph in 6.8 seconds. To ease manufacture, the revised two-seater utilized a cast-iron cylinder block and steel bodywork. Inheriting its forebear's cabin architecture complete with steeply raked bucket seats, aluminium fascia, suede-topped dashboard and 'chrome fingered' transmission gate, the model evolved through ‘L’, ‘M’ and ‘E’ Series. Regardless of Series / Tipo designations, just 488 right-hand drive 246 GTs are thought to have been UK supplied.

According to Tony Willis of The Maranello Concessionaires Archive, chassis 01950 was one of just forty-eight, ‘Series M’ Dino 246 GT cars produced by Ferrari SpA for the UK market. Specified in Argento Auteil 106-E-1 with Black 161 Plastica upholstery, Black carpets and electric windows, Order D/41 cost first owner – F. Tydeman Esq of Greystone Garage, Swanage – some £5,210.75. Copy correspondence on file between Mr Tydeman and Mike Salmon of Maranello Concessionaires reveals that the former initially planned to collect the two-seater from the factory and asked (unsuccessfully) if it could be fitted with a wood-rimmed Daytona steering wheel.

In the end he took delivery of the newly registered ‘FPK 28J’ from Maranello Concessionaires’ Egham premises on 27th May 1971. The Dino 246 GT changed hands twice more before being bought by the vendor’s late husband and his brother on 3rd June 1975. Both fully apprenticed toolmakers, the siblings became enthusiastic members of the Ferrari Owners’ Club of Great Britain but restricted usage of their treasured Dino to select social trips and FOC outings.

Despite being kept garaged, time caught up with the 246 GT and what the brothers thought would be a cosmetic refresh when they embarked up on it in 1991 soon turned into an extensive, ‘ground up’ restoration. The body was stripped out and all surface rust removed from the chassis. Corroded bodywork was replaced at Moto Technique of Chertsey. The front valance and sections around the rear wings were replaced. The car was painted by Spray Tech of Cirencester. All the suspension was checked and stove enamelled. The shock absorbers were refurbished by Koni. The engine was found to be in very good condition. However, as a precautionary measure the valves and seats were replaced (Nimonic) as it was alleged at the time that high mileage engines could suffer valve breakage. All the ancillary parts were renovated, some made in stainless steel. The exhaust was replaced by a new one in stainless steel. The car has been kept as original as possible with the exception of the red paint finish, leather interior and the paint finish on the camshaft covers. Even the headlights were dismantled, re-silvered and refitted.

Completed during 1995, the restoration was met with much acclaim. Sadly, the vendor’s husband died thereafter prompting the 246 GT to be laid-up. Having taken the decision to return the two-seater to the road, the family entrusted it to Peter Chambers Automotive of Tewkesbury in early 2019. Recommissioned at a cost of £7,719.55, ‘FPK 28J’ remains highly presentable some two years later. Showing just 50,400 miles to its odometer and coming to market for the first time in forty-six years, this decidedly rare UK-supplied Series M Dino is worthy of close inspection.