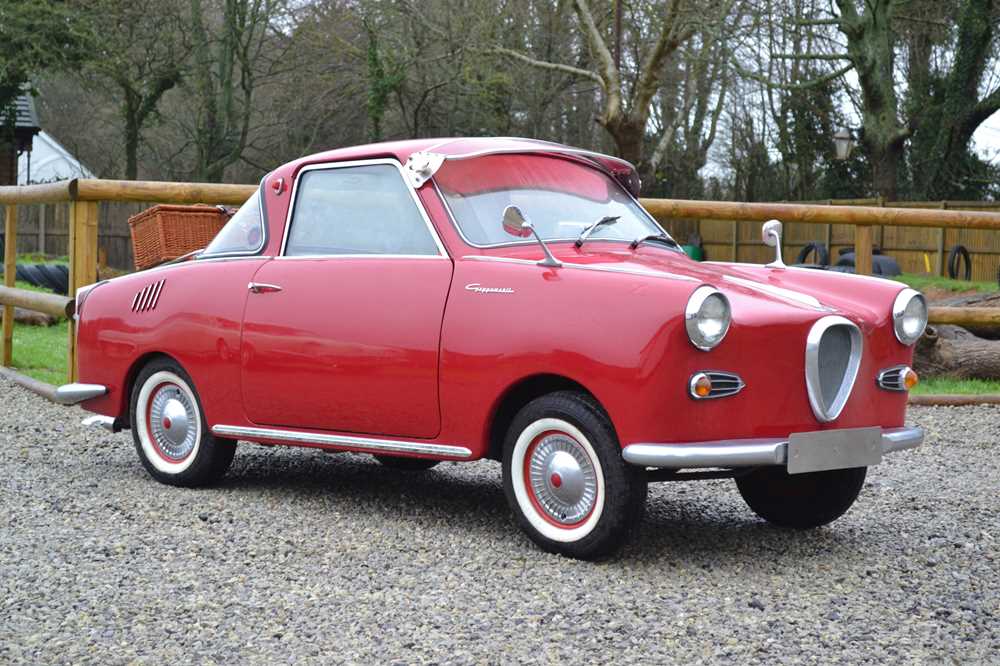 Hans Glas was a German motorbike manufacturer, active between 1951 and 1969. In 1955, they first presented the Goggomobil, a microcar equipped with a rear-mounted, two-stroke, air-cooled motorcycle engine with an initial displacement of 245cc, which was subsequently increased to 300cc and in the final evolution, 400cc. Initially presented with saloon bodywork, the TS 250 Coupé made its debut at the 1957 IFMA International Bicycle and Motorcycle Show. Remaining in production until 1969, the Goggomobil's were manufactured by BMW from 1966. A total of 66,511 cars being manufactured.

The unusual name is derived from Hans Glas’ grandson who was a young enthusiast nicknamed Goggi, from which Goggi Mobil quickly became Goggomobil. They were particularly well-made, with modern refinements including a load-bearing body, 4-wheel independent suspension and floor mounted change gearbox. Still very pleasing on the eye today the Gogglmobil was a huge success.

Manufactured in 1969 this TS 250 was supplied new to Germany and was reportedly in the previous ownership for approximately 35 years. The Coupe is fitted with the twin-cylinder 245cc air-cooled two-stroke engine, producing 13.6bhp and mated to a four-speed plus reverse gearbox. Finished in red, with grey interior upholstery, this Goggomobil has many fetching factory extras such as the original sun visor, dash mounted radio and warning triangle. With numerous other period style features adding to the appeal such as the rear basket carrier with wicker picnic basket (containing tool kit), white wall tyre spats and fishtail exhaust trim.

Since importation into the UK the Goggomobil has benefitted from an engine service and carburettor overhaul in 2020. Supplied with a quantity of German paperwork including past registration documents and a few images of the Goggomobil in previous ownership in Germany, the TS 250 is further accompanied by a Spare Parts Manual and Operation and Care Manual. Offered with three engines (as pictured) which turn freely but will require rebuilds.

A charming example that provides a great opportunity to enter the microcar community or add another rare microcar to a collection.