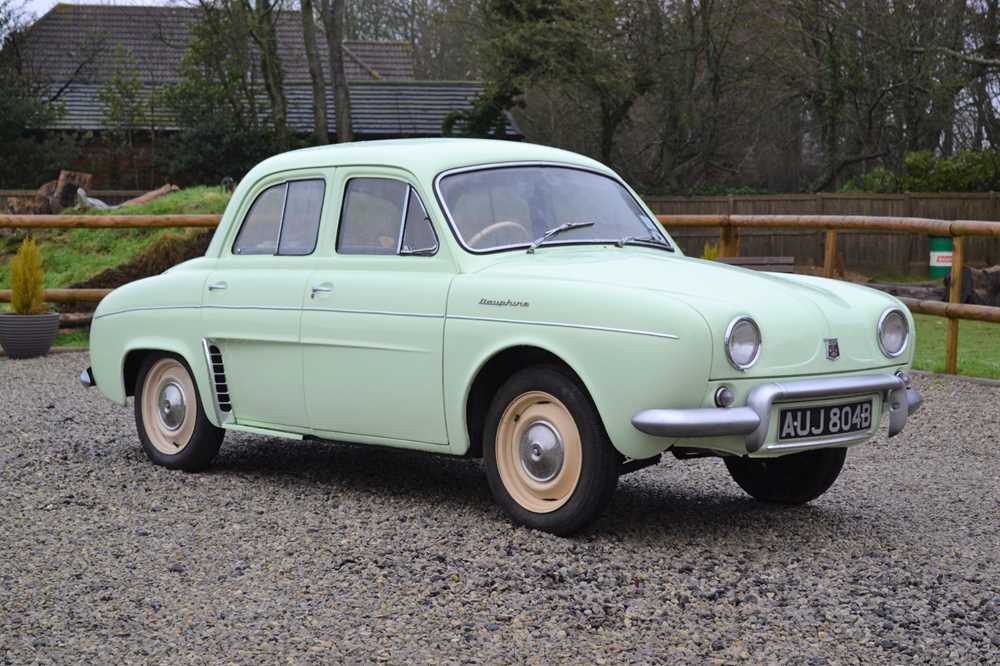 Introduced in March 1956 the Dauphine was revolutionary in the world of popular 5CV. The only inclusion from the 4CV were the wheels with five nuts and a few mechanical elements. The small family sector was a bestselling market in France at the time, and the Dauphine was quick to gain a large market share. However the Renault Dauphine’s appeal saw it sell well in countries beyond its French homeland, selling more than two million in the 11-year production run. The engine was still mounted at the rear, a habit of Renault at the time, with a 845cc straight-four engine which allowed a maximum speed of 110km per hour. While the Dauphine was originally an 'economy car' the 875cc four-cylinder engine was later breathed on by Amédée Gordini and produced an impressive 37bhp once tuned.

The example offered was manufactured in 1964 and was a UK-supplied right-hand drive model being sold through Doody’s Garage in Shrewsbury. Now finished in the typically period colour of pastel green, the colour was changed from its previous yellow when restored. The restoration was finished in c.2010 with a small photo album of the works completed included (as pictured). The interior is trimmed in leopard print and brown upholstery. The Renault shows a recorded mileage of 69,105 (atoc) and HPI shows the Renault has had seven former keepers, with current ownership since 2019.

Supplied with original book pack including Driving and Maintenance Guide, Maintenance and Repair Series Book, Workshop Manual and ‘The Book of the Renault Dauphine’. Accompanied by old-style green logbook; a selection of MOTs dating back to 1988; some past invoices and a current V5C.