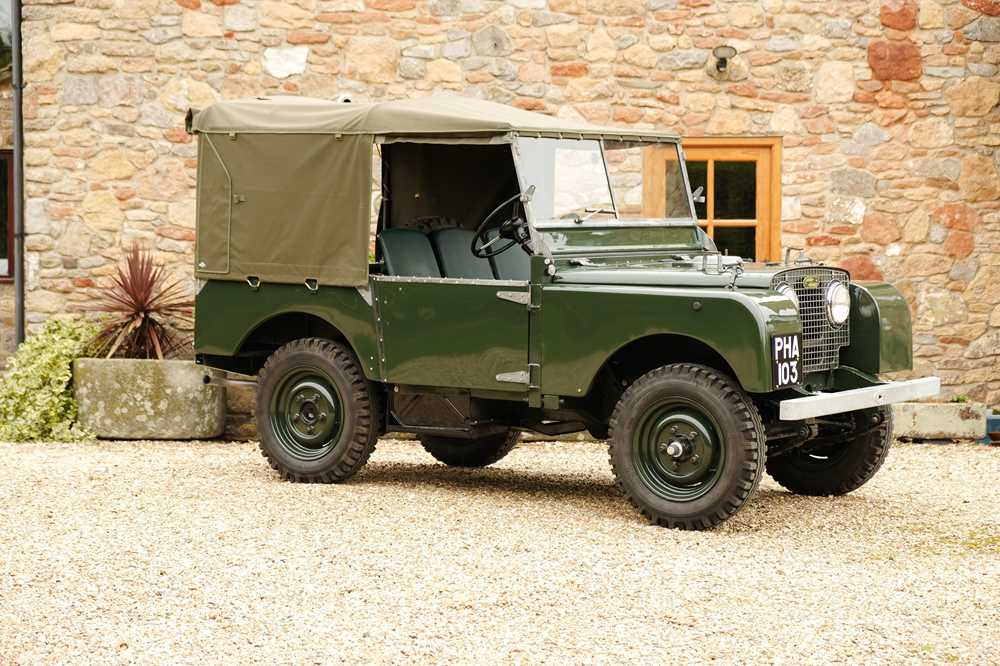 Rover needed a stop-gap solution to the slow post-war sales of its pre-war designs. Chief Engineer Maurice Wilks' 'Land Rover' seemed to be the answer. His design was as much a tractor as a car. The centre-steer concept, built in the summer of 1947, had the steering wheel in the middle, mainly because Maurice had the farming community in mind when he was designing it. The car was put to work ploughing, and Maurice designed front and rear power take-offs to run belt-driven machinery. Rover quickly approved it for production, albeit without the central driving position, which proved impractical and costly to engineer. The steel box-section chassis with its aluminium body was actually designed to get around the post-war scarcity of steel and make use of the plentiful, war-surplus Birmabright aluminium. But it was also lightweight and rust-resistant, and the pioneering use of aluminium remains a feature of Land Rover vehicles to this day. A single paint colour was offered: light green.

The 1595cc, 50BHP four-cylinder Rover engine might seem under-powered today, but its 80lb-ft of torque was impressive. There was permanent four-wheel drive, leaf-sprung suspension and not much else for your £450 when it was launched at the Amsterdam Motor Show in April 1948. Any kind of extra equipment came at an additional cost, but the orders started to come in. The very first Land Rover registered was one of the Amsterdam Motor Show cars on 21 May 1948, and full production began at Solihull shortly after. Rover soon saw that the vehicle’s appeal went beyond expectations. In 1949 the British Army placed its first order. It wanted 1,878, so many, that the decision was made to paint all Land Rovers in the Army’s dark green and they saw their first action the following year, in the Korean War. The Red Cross ordered its first Land Rovers in 1954, and its relationship with the marque endures to this day.

In 1954, Solihull made its 100,000th Land Rover and by the time the Series I was replaced in 1958, nearly 200,000 had been produced. With 70 per cent exported, the principles that Maurice Wilks first sketched in the sand at Red Wharf Bay in Anglesey had been put into practice across the world.

Manufactured in 1950, this desirable example was supplied to the UK, being registered new in Smethwick on 1st December that year. On its original plate, 'PHA 103' has recently undergone what could be described as a fastidious restoration after being purchased by the current owner in December 2011. The vehicle was described as an unfinished project and had been last taxed in 1979 and off the road since the 1980’s. This example has completed just 400 miles (approximately) since its restoration and shows currently displaus 25,976 miles on the odometer, although this is unwarranted.

The extensive restoration process was undertaken by a professional restorer as their personal vehicle with the purpose of maintaining as much originality as possible, with considerable work taken to overhaul, repair and renovate every component. As much of the original bodywork was saved as was practical; with just the outer front wings being new and the bulkhead being a 95% new scratch built replacement. 'PHA 103' also has a factory chassis; believed to have been replaced very early in the vehicle’s life. The result of this maintains an element of patina to the restored vehicle. We are informed even the screws are aligned correctly, period correct Avon Traction Mileage Tyres are fitted and paint showing rivets and spot welds underneath. The restoration was completed in June 2019 and the vehicle comes with full weather equipment including the side screens not photographed.