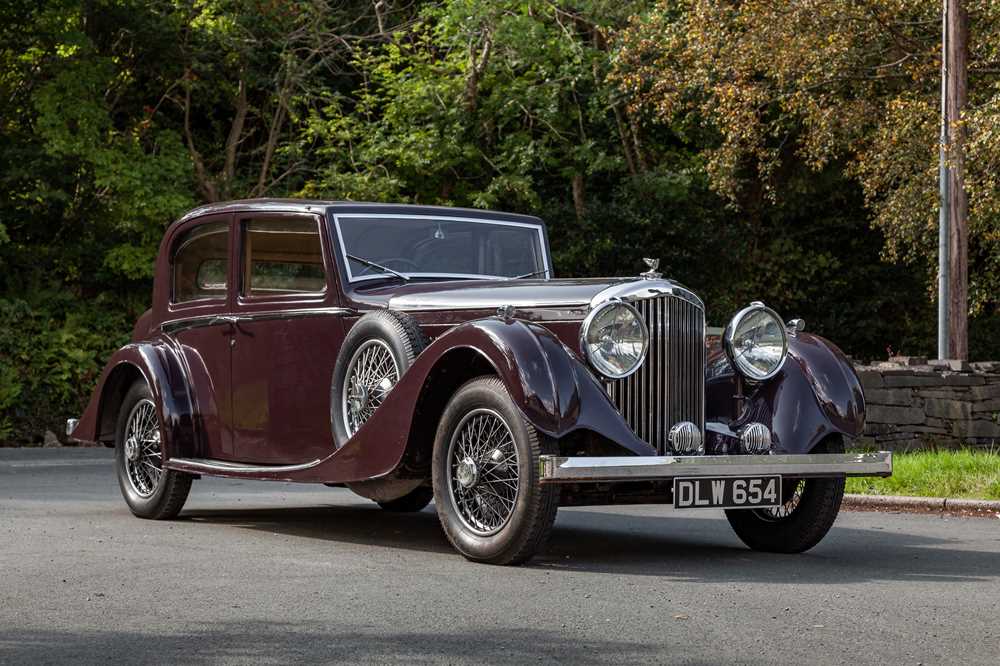 Originally ordered by Jack Barclay Ltd of Mayfair for stock, chassis B191HM was supplied new to Miss Durand of Kensington & Chelsea. The work of esteemed firm Vanden Plas, its decidedly elegant, Pillarless Sports Saloon coachwork (body number 3503) cost some £395 alone. Intended for ‘town work and touring’, the Bentley was specified with a sunroof, Philco car radio, slightly angled gear and handbrake levers and louvres that extended from the bonnet into the scuttle. Miss Durand’s custodianship was comparatively fleeting but Jack Barclay Ltd certainly developed an affinity for the car re-selling it in 1938 and 1947 (copies of the showroom blurb on each occasion remain on file). Having bought ‘DLW 654’ when it was twenty months old, Ernest Thornton-Smith Esq. of Queen Anne’s Gate, SW1 (and later Soho Square) covered a substantial mileage during his nine-year tenure increasing the odometer reading from 15,000 to over 100,000 miles. Such extensive usage during World War Two whilst petrol was heavily rationed suggests that Mr Thornton-Smith either played an important role during the conflict or lent his car to the armed forces. Interestingly, he was a master of the Worshipful Company of Gardeners as well as a renowned antique dealer and interior designer (the Thornton-Smith Co operated on both sides of the Atlantic).

Fitted with an exchange cylinder block in 1939, the Bentley had also been repainted from Steel Dust Metallic to Black (perhaps due to wartime duties?) by the time that J.B. Upton Esq of Rolston Hall, Yorkshire acquired it from Jack Barclay Ltd eight years later. Off the road for sometime (or possibly abroad), chassis B191HM was re-registered with the DVLA during 1979. Treated to a photographically documented, bare metal, chassis-up restoration in the early 1990s at a reputed cost of £60,000 by then owner Derek Saunders Esq of Blunham, the Pillarless Sports Saloon subsequently spent twenty-three years as part of a private collection. Stored indoors but with a haphazard cover for most of that time, its Garnet paintwork has suffered accordingly. Two accompanying MOT certificates dating back to the mid-1990s suggest that ‘DLW 654’ may have covered less than 1,000 miles since its restoration. Little used for decades, the car was treated to some £7,700 worth of recommissioning in 2019-2020 by Trevor Farrington of Knutsford which comprised: freeing up the braking system, refurbishing the ignition system and fitting a new battery, rejuvenating the fuel system including cleaning/sealing the tank and fitting a new fuel pump, replacing a broken valve spring and resetting all tappets, cleaning and machine polishing the bodywork and chrome-work, and greasing and checking the underside.

The Bentley runs and drives with the engine reportedly showing good compression and the cylinder head appearing sound. However, the straight-six is not as smooth or quiet as it should be and would thus benefit from further attention. The front brakes are currently disconnected due to the brake shafts being seized. On the plus side, the wooden body frame seems particularly sound with the doors all opening and closing easily (a notorious weak point on Pillarless cars) and the interior trim remains highly presentable. A very worthwhile project which would doubtless still cut a dash in Mayfair traffic, this desirable Vanden-Plas bodied Derby Bentley is offered for sale with V5C Registration Document, RREC copy chassis records, restoration photos and sundry other paperwork.