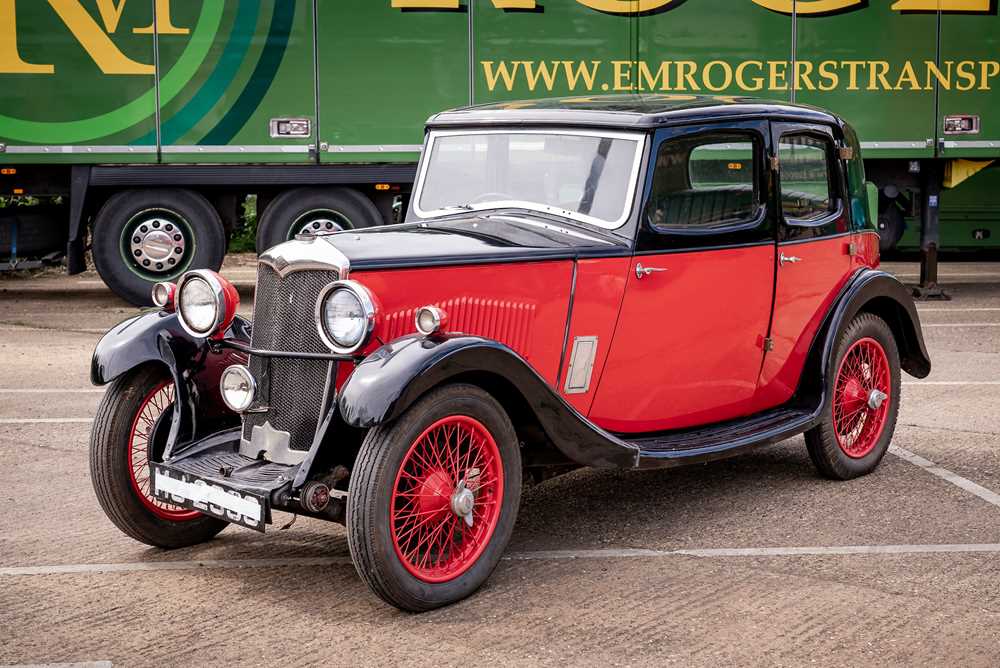 Redesigned for the 1933 model year, the Riley Nine Monaco could be had with all-metal coachwork for the first time. A nicely proportioned, four-door, four-light saloon, its potent 1089cc ‘twin cam’ four-cylinder engine gave class-leading performance.

First registered in Bedfordshire as ‘MJ 2999’ on November 1st 1933, this pretty Monaco Saloon is understood to have belonged to Lieutenant Colonel Evan Stewart Jenkins by circa 1950 whilst he was residing at the Army & Navy Club on London’s Pall Mall. Retiring to Dorset, Jenkins entrusted the Riley to Bob Miller during the mid-1970s for attention to its engine, gearbox, brakes and instruments plus the fitment of a new fuel tank. Handwritten correspondence on file reveals that the relationship between client and restorer was not always a happy one! Sold to a Mr Coomber who lived near Yeovil in 1977, the four-seater is then known to have passed through the hands of Mr Tavener, Mr McGregor, Mr Haynes and Mr Leveson. Partially dismantled when the latter acquired it during April 2012, he thankfully decided against conversion to a Special and set about putting the Monaco back on the road. Work reportedly saw the engine, gearbox and differential serviced, the brakes overhauled and the kingpins renewed. New oil seals were fitted to the front and rear hubs and the starter motor rejuvenated. The heavily patinated bodywork and interior were reinstated and the Riley consigned to a Brightwells auction on 11th May 2016. Purchased by the vendors’ late father for £12,096, the Saloon was subsequently repainted in Red over Black with its front and rear seats being recovered with Black upholstery too. Re-registered as ‘VXS 660’, the Monaco has seen little use since its last MOT certificate expired on 14th July 2017. Now in need of recommissioning / refurbishing, it is offered for sale with assorted paperwork dating back to a MOT certificate issued by Foster & Heanes of Dogmersfield, Hants and V5C Registration Document.