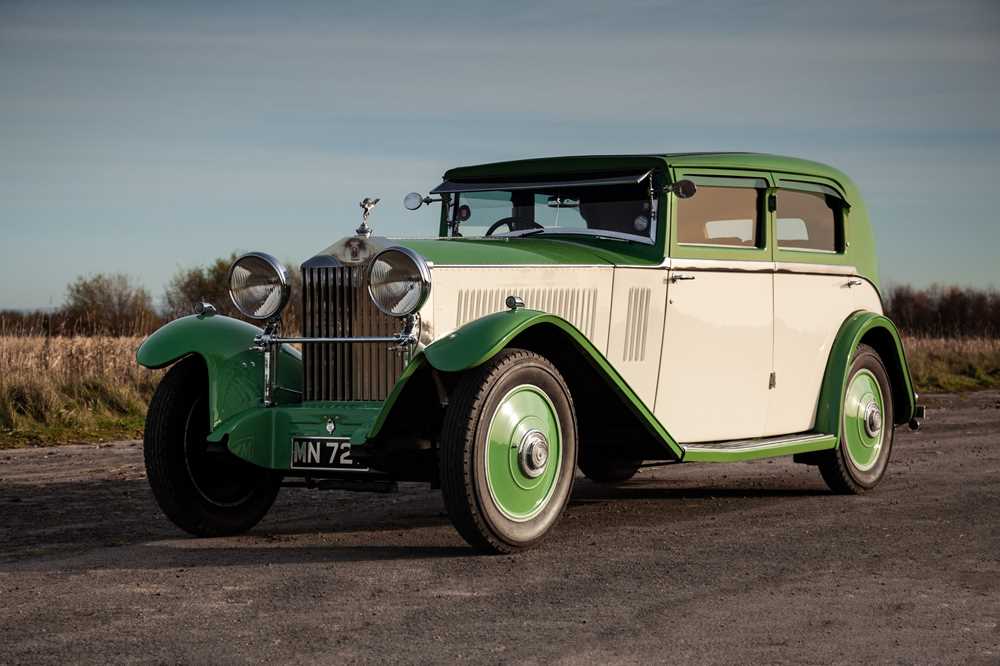 Exhibited at the October 1931 Salon d’Automobiles in Paris’s magnificent Grand Palais, chassis GFT2 provided coachbuilder Barker with an opportunity to showcase its talents to a truly international audience. Thought to be unique, the Swept Tail Sports Saloon body that the London firm created for the occasion was a stylistic masterclass.

The Rolls-Royce’s previous owner, Julian Bowen, was unaware of its significance when he took possession in May 2008. A renowned furniture designer, the car’s lines enchanted him so much that he rejected a host of other 20/25s and spent well over a year politely badgering his immediate predecessor to sell. Applying to the Rolls-Royce Enthusiasts’ Club for a set of copy build records revealed that GFT2 was a former ‘Paris Show Car’. Suitably enthused, he tracked down relevant copies of Motor and Autocar magazines which confirmed the 20/25 had originally sported a bold two-tone livery and wheel discs. Determined to return the Swept Tail Sports Saloon to its former glory, Mr Bowen embarked upon a meticulous restoration the story of which is recounted in his own words below:

“We decided to start with the body repairs, keeping an eye for traces of the original colour scheme - Green and Cream! It took time to be satisfied with a hue match, but after weeks of experimentation we felt it was perfect.
I was lucky to be using a small body shop outside Grantham whose approach was as fastidious and perfectionist as my own. The chromework was re-plated and the bonnet hinges remade in stainless steel. In removing the hinges, the original rivets had to be sacrificed. I purchased replacements but they stood too proud. A retired friend heard of the problem and offered to machine over 400 rivets to the correct profile! He also remade the Barker patented dipping system in stainless steel. At the same time all the dome headed coach bolts on the body were remade in stainless steel. A commercial supplier supplied new wheel discs. The original windscreen had delaminated so a new one was obtained. The chrome went back on, the locks were repaired, and the headlamps sent to Sheffield to be refurbished. It was time to tackle the trim.
Around 1960 'Arabella' (as she is known) had been sold to America spending the next 25 years in Florida. Painted Copper Bronze, fitted with Buick bumpers and shorn of her wheel discs, she also suffered heat damage to the interior. Thankfully, the original but heavily cracked horsehide leather was covered over with vinyl rather than being discarded. A small tannery in Southern Spain, who tanned leather by hand, were able to colour match using cowhide. I already knew a trimmer whose work was of very high quality and was confident he would maintain the standards already achieved. The original stuffing of horsehair and latex was re-used. There were no carpets or headlining present, so we chose colours that suited the rest of the livery.

Basically the engine and drivetrain were in good condition, but some ancillary equipment had gone missing over time. The most difficult items to source were the under trays and the starter solenoid. The engine had been worked on by the previous owner and already boasted an aluminium cylinder head and re-metalled bearings. The engine compartment was tidied, and all electrics re-wired using correct colours. After steam cleaning the chassis and re-painting, she was much admired by all who saw her.

Over the course of the restoration, research into the car's history proved very interesting. The first owner, who saw it at the Paris Show in the Grand Palais was a well-known enthusiast for the marque, Captain JF Kruse MC. Born in 1892, Jack Kruse was the eldest son of a successful banker who, having survived a torpedo attack in WWI, left the Royal Navy with the rank of Captain. Following the war, he established successful business enterprises in England and The Netherlands, married an American hotel heiress, and cultivated various connections among British high society. By the end of the 1920s, Capt. Kruse maintained residences in London and the French Riviera.

During this period, Capt. Kruse also developed a passion for elegant, high-performance motor cars. He owned some of the finest thoroughbreds of the era including an Alfa Romeo 6C 1750, Bentley 6 1/2 Litre, Bugatti Type 35, Mercedes-Benz SS, Low-Chassis Invicta, and Lancia Lambda, among others. Inspired by his close associate Lord Rothermere, the co-founder of the Daily Mail and an early patron of Rolls-Royce, Capt. Kruse became one of the firm’s most important customers, purchasing three Silver Ghosts, four 20 HPs, four Phantom Is, four Phantom IIs, and four 20/25s. Due to his friendship with Frank Manning, the showroom manager for Barker & Co., most of Capt. Kruse’s Rolls-Royce were bodied by this prestigious coachbuilder.

The next owner, the Marquis de Portago, who bought the car in 1933, was a personal friend of Captain Kruse, the two having met on the polo pitch at the Hurlingham Club. In 1928, he had had an only son named Alfonso, whose mother used the car until it was disposed of just pre-WW2. Alfonso became a famous racing driver before his death in the 1957 Mille Miglia. The car spent World War Two in storage in Montpelier Square, London, emerging in the ownership of another Captain - Captain Drummond MC, a member of the banking family and a distant relative of the Queen Mother.
Around 1960 she was sold to an American Serviceman based at Bicester and subsequently shipped to Florida. He registered her '1931 RR', and over 20 years allowed her to descend into dilapidation. She was spotted in Miami and brought back to the UK by Porters of Kensington and, shortly afterwards, c.1985, acquired by the retired motor engineer in Lincolnshire from whom I bought her in 2008. Built as a 'one off', she remains unique although rumours exist of a similar body built on a Phantom chassis.
Since completion 'Arabella' has travelled c.16,000 miles. The first ride overseas was to the Classic Le Mans meeting, then a tour was made under the auspices of the ‘Club d'Auto’ around the Champagne vineyards of Epernay. We then attended the Circuit des Remparts at Angouleme before being invited to attend the British Car Club Meeting in St Moritz where we participated in the Rally, negotiating two Alpine Passes of seven and eight thousand feet before coming second in the Concours.

She has made two trips to the Goodwood Revival and in 2012 she won Best in Class and Best in Show at the RREC Annual Rally at Rockingham. The achievement shortly afterwards of winning 'Best in Show' at the 2013 NEC Classic Car Show is a fitting testimonial to the craftsmen and friends who have helped to create the masterpiece that is the first Rolls-Royce to win this coveted award”

Purchased by the vendor from Mr Bowen via our 2015 RREC Burghley House auction, GFT2 has continued its winning ways. Much appreciated wherever she goes, ‘Arabella’ was crowned 'Best in Show' at the 2018 RREC North of England Rally. Apart from this, ‘Arabella’ has been used for many local events on the Isle of Man since being acquired by the vendor. The last couple of months have seen the 20/25 treated to a new battery and full service. Worthy of close inspection, this decidedly special Rolls-Royce’s return to market has only been prompted by impending medical treatment. Offered for sale with large history file, handbook, car cover, hazard light kit (unfitted) and sundry tools.