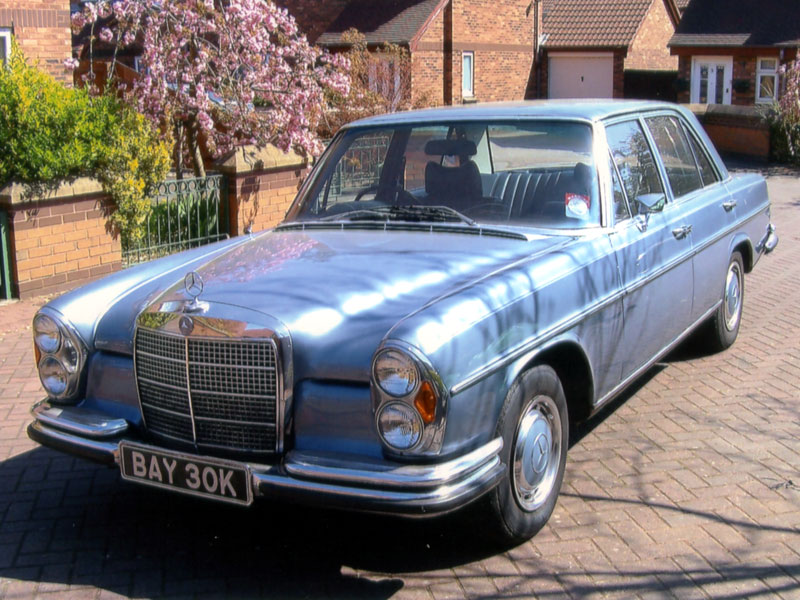 The Paul Bracq-designed W108/109 Series Mercedes-Benz saloons of 1965-1972 were intended as a replacement for the top end models of the 'Fintail' era and, though less extravagant in their looks, were some of the best built and equipped cars of their time. Of steel monocoque construction, they featured fully independent suspension - double wishbones and coils springs at the front and swing axle and coil springs at the rear. Braking was by discs all round and steering was by a manual or power-assisted circulating ball system. The initial engine line-up was based on that of the outgoing W111 Series of SOHC straight six units, and gave the choice of 2.5 or 3.0-litre powerplants. In 1968, the 2.5-litre unit was superseded by a 2.8-litre version giving 140bhp in the 280S and 160bhp in the 280SE that was equipped with Bosch fuel injection. There was the choice of either four-speed manual or four-speed automatic transmission. By 1970, the lack of a mainstream V8-powered W108 was proving to be a handicap in the American market, so it was decided to offer a version equipped with the 3.5-litre V8 engine destined for the up-coming W116 Series. Dubbed the 280SE 3.5, it produced 200bhp and 211 lb ft of torque. Some 12,000 280SE 3.5s were produced in 1971/1972.

The relatively rare RHD example being offered is a 1971 car equipped with the optional automatic transmission. It is finished in blue and fitted with a matching blue leather interior. It is understood to have had some £5,000 lavished on it in the last three years. Engine work has apparently included replacement seals for the valve stems, injectors and manifold, while the power steering and central locking have also received attention. The vendor rates the coachwork and paintwork as being in "condition A", the engine as "very good", the transmission as "excellent" and the interior trim as "very good". Indeed, the only item he cites as now needing some attention is the radio. This presentable Mercedes is MOT'd until the end of November and taxed until the end of March 2011, so would appear ready to potentially provide many miles of relatively inexpensive, trouble-free motoring for the next owner.
Share: