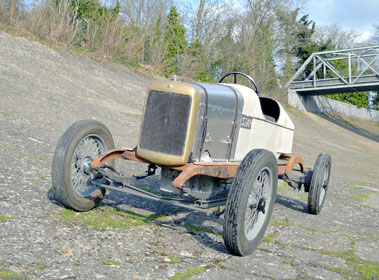 Sir Malcolm Campbell held a London agency for Star cars from 1924 until this respected British manufacturer finally closed its doors in 1932: one of Campbell's personal cars was a Star 'Comet 18' sports saloon - finished in 'Bluebird Blue', of course! As Captain Malcolm Campbell in 1924, this famous racing driver and, later, Land Speed Record holder had raced a Star at Brooklands, winning on two occasions. Remarkably, the racing body of Campbell's 1924 Brooklands Star has survived in almost complete and untouched condition, and the vehicle offered today carries that body.

The Star Engineering Co. Ltd., of Wolverhampton, was one of the pioneer British motor manufacturing companies, having produced its first car in 1899, and, by selling relatively straightforward models that relied more on the use of quality materials than on advanced design, had become the sixth largest British manufacturer before the outbreak of the Great War. Star had built racing cars for the 1903 and 1905 Gordon Bennett Eliminating Trials, and had successfully competed in races at Brooklands, and in many sprints and endurance trials. Star track cars featured some of the most advanced streamlined bodies yet seen at Brooklands, and the firm entered two racing cars for the 1914 Tourist Trophy Race on the Isle of Man.

Wartime contracts for lorries and munitions saw the firm well-placed to enter the 1920s, and initially two revived pre-war models were produced. Aware that offering a smaller model would tap into a much wider market, in mid-1921 Star introduced such a car of up to date, all new, design: the 11.9hp which had a four-cylinder 1795cc engine, in unit construction with a 3-speed gearbox. Expensive for its size, the 11.9 Star nevertheless sold well to more discerning motorists. For the 1924 season, the 11.9hp evolved into the 12/25hp, with 10mm longer stroke giving 1945cc capacity, and the engine now with three main bearings to the two of the 11.9hp. The 12/25hp also found a ready market among purchasers who valued its bespoke character, and it continued in production until early in 1927, unchanged apart from the introduction of four wheel braking for 1925. By Easter 1924, Star was experimenting with an overhead valve development of the 12/25hp and the first production examples of what became a new model, the 12/40hp, appeared in the autumn of that year, marketed as a 'sports model'.

Malcolm Campbell was a director of the Brooklands Track, where he was one of the most popular drivers, ever in the public eye and planning to become the 'fastest man on Earth' by capturing the Land Speed Record with a V-12 Sunbeam. He appeared in 1924 at the wheel of Ballot, Sunbeam and Itala racing cars as well as in the Star. It is not definitely established that his racing Star was one chassis modified, or two different cars: initially a bulbous-tailed two-seater body was fitted to an artillery wheeled chassis, and photographs taken later in 1924 show a car on Rudge wire wheels, and with the steering now centrally-placed and a pencil-slim single-seater body - the surviving body, in fact. A feature that suggests that Campbell's Star retained the same chassis throughout, is that the track rod is shown to be placed forwards of the front axle in all the Brooklands photographs; this was not a feature of the production Stars at this period.

At the 1924 Brooklands Easter Meeting, Campbell raced his own 'Bluebird' (the ex-Coppa Florio 5.9-litre Sunbeam), and he also drove the specially prepared Star in two races. He won Race 4, the 75mph Short Handicap, at an average speed of 73.25mph, the car then in its two-seater body form. This car might have been one of the old 11.9hp models, as the chassis frame used was the lighter 11.9hp chassis of 9ft 0ins wheelbase, and, according to the cubic capacity declared and recorded in Brooklands Museum records, on this first outing it seems that the car used one of the old 1795cc 11.9hp engines.

Campbell again entered the Star, now fitted with a 3-bearing 1945cc engine for two races at the June Brooklands Meeting, an event unfortunately abandoned due to a fatality. A photograph taken at the Essex Auto Club July Meeting, shows the completely revised racer with the polished aluminium single-seater body and Rudge Whitworth wheels painted black. At the BARC Meeting later in July, the Star was unplaced, and although the bore and stroke were given as previously, the declared capacity was now 1972cc, possibly indicating further engine modifications. At Brooklands on September 13 1924, twelve days before attaining his first World Land Speed Record, Campbell's Star won Race 2, the 75mph Short Handicap, at 79.95mph, the Star now with the overhead-valve version of the 3-bearing engine, which exhausted down the off-side of the car, as shown in a photograph.

The scene now moves to Belfast, where Coulter & Co of 51 Chichester St were successful Star (and Ford) agents. Cecil Cathie, a director of Star, had considerable experience of competing with other Star cars in Ulster events, and this connection may have led to the ex-Campbell racing body arriving at Coulter's garage, as this firm promoted sales through entering Star and Ford cars in competitive motor sport events. Jack Coulter's personal car was a 1926 Star 12/40 two-seater that he turned over, while, it is alleged, 'showing off' to the wife of a well-known motor sport personality. Sadly, Jack lost an arm in the accident, after which apprentice Bob Wylie (father of the vendor) had the additional responsibility of driving him to and from work in this car. The repaired 12/40 Star was pressed into competition use, to be raced, less mudguards, by charge-hand W H Connolly who achieved a number of successes at sand racing and various hill-climbs. When the Ford Motor Company instructed Jack Coulter to confine his activities exclusively to Fords, Connolly opened his own garage, selling and servicing Stars. Part of the assets acquired by Connolly was Coulter's 12/40 Star, now fitted with the ex-Campbell single-seater racing body. Connolly's earlier successes were to continue, including FTD at Ballybannon Hill Climb in Co. Down. Eventually the original two-seater body was reunited with the 12/40 chassis, in which form this car still exists in England, and the single-seater body was tucked into the rafters at Connolly's garage in Donegall Pass, where it remained until recent times.

What better resting place for the racing body could be found than a 1924 period Star chassis? As no such was available, the vendor has diligently collected and loosely assembled all the major parts, mainly from Star spares made available by other enthusiastic owners, plus the remains of a later Star 6-cylinder chassis that provided the frame - now altered to 1924 4-cylinder configuration, and the gearbox. Included are a 1920s Star steering box and a reproduction steering wheel, a correct overhauled magneto, the original seat, some floorboards and an assortment of engine, transmission, brake and steering parts to aid completion: the steering column, mountings and drop arm are missing. The 12/25hp engine and axles date from 1924. It presents as a fascinating project for the keen restorer, but is offered strictly as seen.