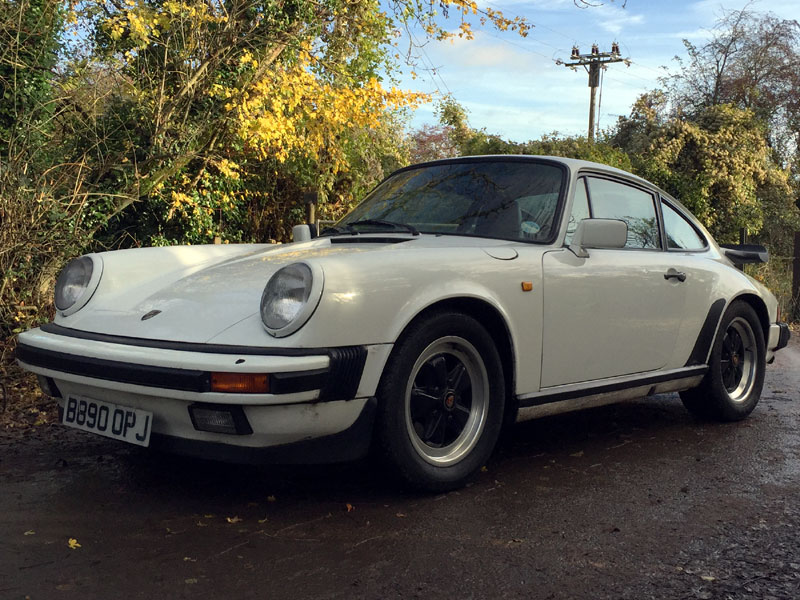 The 911 Carrera 3.2 made its debut at the 1983 Frankfurt Motorshow. Estimated to be 80 percent new, the model's 3164cc (hence '3.2') flat-six engine was credited with developing some 231bhp and 209lbft of torque. Allied to a five-speed transmission, it proved both rev-happy and flexible. Capable of 0-60mph in 5.3 seconds and 153mph, the Carrera 3.2 was progressively refined and updated over the course of its six-year production run. From 1984, those looking for that little bit extra in terms of poise and road presence could opt for the 'Sport' package (later known as 'Sport Equipment') which included a deeper front valance, 'tea tray' rear spoiler, Bilstein dampers and 16-inch Fuchs forged alloy wheels.

Originally finished in Grand Prix White with Navy Blue pinstripe upholstery and a sunroof, this particular example was supplied new to Mr Jacobs of Henley-on-Thames. The presence of eight service stamps up to 73,657 miles not to mention a wealth of accompanying MOT certificates mean that the vendor is happy to warrant the current odometer reading of 99,800 miles as representing the total covered from new. Treated to an engine overhaul less than 1,500 miles ago before being dry stored for nigh-on a decade, the Porsche was recommissioned by M R Performance Cars of Salisbury just a few months ago at a cost of some £3,055.68. As well as a thorough service, attention was paid to the 911's brake system, fuel system, sensors, engine mounts and washer pump etc. Driven over 1,000 trouble-free miles since then, the Carrera 3.2 has also benefited from a partial repaint. Still sporting its original under boot specification sticker and unused space saver spare wheel (the latter complete with tie-on factory warning label), 'B890 OPJ' appears to have led something of a charmed life. Offered for sale with service book, sundry invoices and MOT certificate valid until 18th October 2017.
Share: