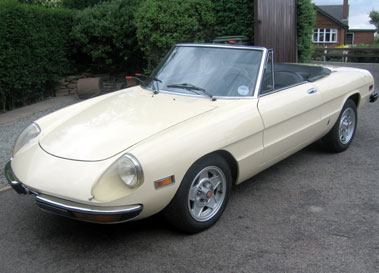 Launched in 1966, Alfa Romeo's new Spider was based on a shortened version of the company's Giulia 105 series platform. Designed and built by Pininfarina, its 'Duetto' nickname was the result of an Italian postal competition. Famously less seductive than Anne Bancroft in 'The Graduate' (1967), the Spider nevertheless attracted a devoted following. Initially fitted with Alfa's jewel like, 1570cc, twin-cam, four-cylinder unit in 109bhp tune, its chassis proved so unruffled that engine capacity rose to 1779cc in 1967 and 1962cc some four years later. Equipped with all round independent, coil sprung suspension, four wheel disc brakes and a five-speed manual gearbox, the 120mph 1750 Spider Veloce offered a level of ride and handling that few rivals could match.

Finished in ivory with black tex / leather upholstery, this particular left-hand drive example is described by the vendor as being in "A1" condition with regard to its 1779cc engine, five-speed manual gearbox, electrical equipment, interior trim, chassis, bodywork, paintwork and wheels / tyres. Reportedly "1 of 460 cars made to this specification", 'SVO158J' entered the current ownership during 2001. Emerging from an extensive three-year long restoration in April 2006, work is said to have included a thorough mechanical overhaul, bare metal repaint, new upholstery and fresh carpets etc. Fed by twin Weber carburettors in place of its original (but more restrictive) Spica mechanical fuel injection system, the Spider is understood to have covered some 3,000 miles since the refurbishment was completed. Sporting Perspex headlamp covers and a Kamm tail, it rides on five-spoke alloy wheels. Featured in the April 2007 issue of Practical Classics, this gorgeous Alfa is offered for sale with MOT certificate valid until May 2008 and historic class (free) road tax valid until April 2008.
Share: