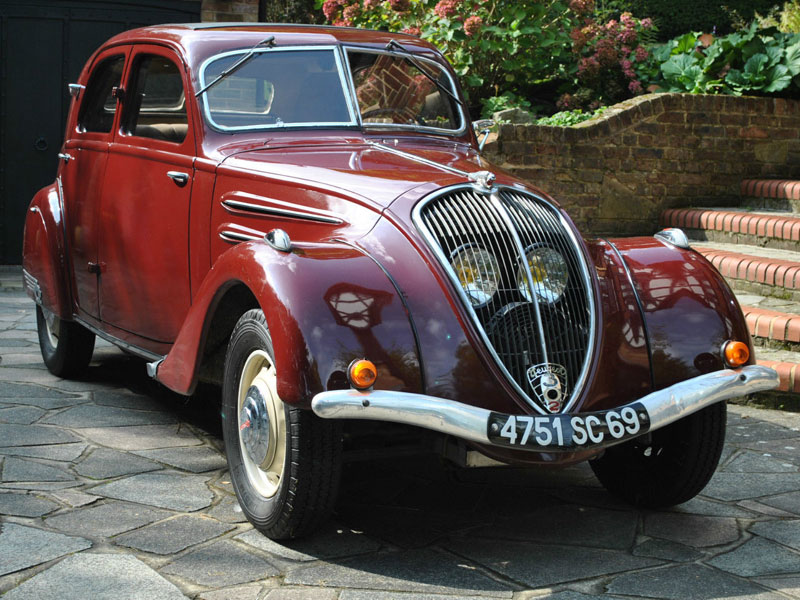 Introduced in 1936, the Peugeot 302 / 402 series were stylistically indebted to Chrysler's Airflow Sedan which had debuted a few years earlier. However, whilst the American public failed to warm to the Chrysler, the Peugeot duo were far better received in Europe and indeed influenced the offerings of BMW and Fiat amongst others. The chassis and engine of the 302 also formed the basis for the very successful Peugeot Darl 'Mat coupes examples of which contested the 1937 Le Mans 24-hours.

This particular example was restored some 16 years ago in France by a Rhone-based retired aircraft engineer who retained its factory-fitted engine and preserved its incredibly original interior (carpets, mats, seats, panels and period accessories). Delivered to Lyons in 1937, the 302 is accompanied by a UK V5C Registration Document, copy French registration document, original handbook, recent invoices and Peugeot Lettre D 'Attestation confirming its date of manufacture. The following work has been carried out over the Winter of 2015/16: overhauled carburetor, new battery / tray, new brake shoes, conversion to Ducellier two-brush dynamo / regulator and refurbished fuel pump. The car is easy to start and runs very well on the road in modern traffic. It is probably the most original 302 for sale at present, benefitting from charming mellow appearance with restored mechanicals. It has been used regularly over the last few years. In 2015 it successfully completed the Fougeres Rally in Normandy, a trip to the Goodwood Revival followed by the Automobile 'Oily Rag' run on Rutland Water last September with constant oil pressure and a reasonable cruising speed. It is on the button, has effective brakes and steering. It is rarer than its competitor the Citroen Traction, and is a charming quirky example of French aerodynamic styling from the mid 1930's.
Share: