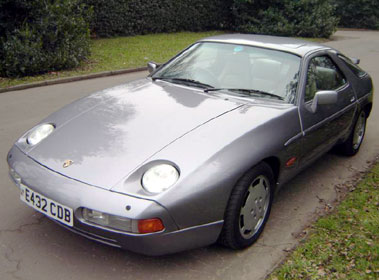 Introduced at the 1977 Geneva Motor Show, the 928 was conceived (and priced) as the flagship of the Porsche range. A luxurious GT, it was styled in-house by American Tony Lapine as a replacement for the ageing, compromised 911. Ultimately, it failed to usurp its tail-heavy sibling despite becoming the only sports car ever to win the European Car of the Year title in 1978. Built around a galvanised steel monocoque, it made extensive use of aluminium for its wheels, doors, bonnet, transaxle housing, front suspension wishbones, rear suspension uprights, upper links and main cross member. This practice not only saved weight but also contributed to the near perfect 49:51 weight distribution. Available with a choice of manual or automatic transmission (housed in its award-winning passive rear steer Weissach transaxle) the 928 was regarded as a crushingly capable Grand Tourer. The subject of a continual development programme, it evolved through S and S2 guises before the arrival of the S4 version in Autumn 1986 (the 'S3' being a US market only model). Reputedly capable of 0-60mph in 6.3 seconds and 165mph, the newcomer was powered by an enlarged 4957cc DOHC 32-valve V8 that developed some 316bhp and 317lbft of torque. Equipped with air conditioning as standard, the aerodynamically improved S4 was visually distinguished by a reprofiled nose and revised tail (the latter incorporating new light clusters and a larger spoiler).
Finished in Rose Silver with Stone leather upholstery (piped in black), this particular example is described by the vendor as being in "good" condition with regard to its engine, automatic transmission, electrical equipment, interior trim, chassis, bodywork, paintwork and wheels / tyres. Reportedly "a 1988 model with suspension mods", 'E432 CDB' is further understood to benefit from a tool kit, alarm / immobiliser, tinted glass, air conditioning, electric seats / sunroof / windows, central locking and cruise control (not to mention its special anniversary livery which is reputed to have been an option for one year only on the 924 and 928). Believed but not warranted to have covered 107,000 miles from new, the Porsche is said to "drive superbly with no rattles or bumps" (while, we are further informed that it "holds good oil pressure and does not overheat"). Riding on alloy wheels and retaining its original stereo, this desirable 928 is offered for sale with "lots of history and invoices" as well as a current MOT certificate.
Share: