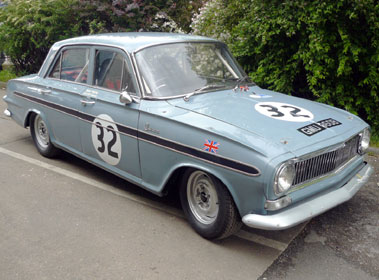 Victor was Vauxhall's large saloon with ever more transatlantic styling though successive model changes. It first appeared in 1957 as the F series, replacing the rounded Wyvern, and in 1961 the FB appeared, whose VX 4/90 performance derivative had a larger 1595cc engine fed by twin Zenith carburettors. It could be spotted by its contrasting side flashes and four-speed floor gearchange, optional on lesser models. A total of 328,640 FBs were produced before the FC appeared in 1964.

This car, from the last year of FB production, was built into a racer in 1994, having been restored from a tidy, rust-free car in 1991. As well as a gutted interior with bucket seat, the car has a six-point roll cage, harnesses and plumbed extinguisher, and is fitted with a high-intensity rear light, all as per racing rules. The motor, originally producing 75bhp, now makes considerably more, breathing through twin Weber DCOE40s, and there is a large remote oil filter and separate header tank, as usual racing practice, plus electric fan, all to help preserve the motor. Suspension has been lowered and some negative camber tweaked into the front, and the steel wheels wear Dunlop Racing tyres as per FIA Appendix K regulations.

It has a FIA Historic Identity Form dating from 1994, when it first raced, and in 2007 appeared in the ever-popular St Mary's trophy race at the prestigious Goodwood Festival of Speed. There is no MoT but this well sorted Vauxhall remains otherwise street legal. As well as being a natural entry for the St Mary's Trophy on the alternate years where it caters for cars made up to the end of 1965, this Vauxhall has a natural place with the Top Hat racing fraternity, or any other FIA historic race, including such prestigious events as the Tour Auto.