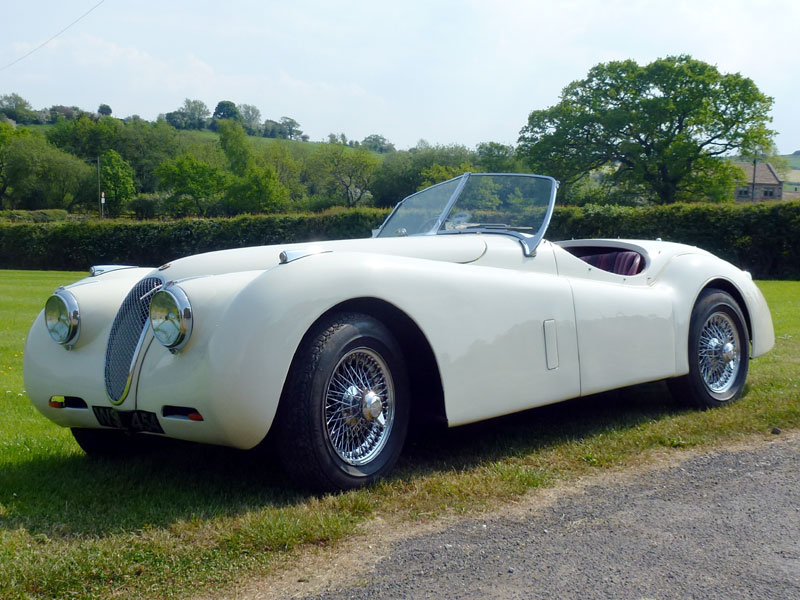 It is true to say that the phenomenal success of the Jaguar XK120 was completely unexpected by Sir William Lyons and the team at Browns Lane, whose post-war focus was the MKVII Saloon. However, as the chassis for the MKV/MKVII Saloons and XK engine neared completion in 1948, it occurred to Lyons that a sports car powered by the stunning new DOHC unit would probably outperform almost anything else in production at the time. Moreover, a limited run of such cars would allow Jaguar to fine tune its new masterpiece before committing it to the scale of production necessary for the MKVII. The extraordinary decision was therefore made to design and build an XK-powered two-seater in time for display at the Earls Court Motor Show of October 27 - an apparently impossible task in the time available.

A fully equipped MKV chassis was duly commandeered and 1ft 6in cut from the centre. The entire project from green light to display at the show, including the manufacture of one of the most sensual-looking bodies ever crafted for a motorcar, took just six weeks. The intention was, depending on public reaction, to hand-build a few hundred Roadsters as required. However, within a few days of the Bronze show car going on display, it was evident that a complete rethink was required - such was the euphoria with which the XK120 was greeted. In the end, production spanned five years and the car was produced in three guises - Roadster, Fixed Head Coupe and Drophead Coupe; the combined production volumes of which were 12,055!

Even the XK engine undoubtedly exceeded all expectations, the basic design of which helped power a whole range of Jaguars right up until the late '80s. As launched, the output of the standard alloy-headed DOHC 3.4-litre, straight-six for the XK120 was 160bhp, but in SE (Special Equipment) guise this rose to 180bhp, and with the C-Type head installed nearer 200bhp was on tap. In testing an XK120 Roadster in 1949, The Motor achieved a 0-60mph time of 10.0 seconds and a top speed of 124.6mph. The 120's innovative front suspension was independent by wishbones and torsion bars, while the rear featured a live axle mounted on semi-elliptic leaf springs. Steering was by recirculating ball and braking courtesy of Lockheed hydraulic drums all round.

This smartly presented right-hand drive XK120 Roadster hails from 1952 and is apparently one of the last to feature separate chrome sidelights. It was purchased by the vendor in 1998 and then treated to three years of restoration and sympathetic upgrades with sporty/long distance Continental motoring in mind. The Jaguar's chassis was modified to accept XK150 telescopic dampers in place of the standard lever arm units and then shot blasted and powder coated. The body was extensively overhauled by Leaping Cats before being repainted in Old English White, fully retrimmed in Red leather and equipped with a new mohair hood, side screens and tonneau cover. The instruments and wiper motor were overhauled and the brightwork parts refurbished or replaced, as were the: engine mountings, steering box and idler, splined wheel hubs, brake pipes, propshaft, rear springs, balls joints, steering and suspension bushes, wheel bearings and wiring loom, while the radiator was equipped with a high performance core and the standard exhaust replaced with a twin pipe stainless steel system. The upgrades include:

Engine - the fitting of a 3.8-litre XK unit updated by VSE to Stage One specification complete with 2 inch SU carburettors and high lift camshafts

Transmission - the replacement of the standard gearbox with a five-speed Getrag unit and the 2HA Salisbury rear axle with a 4HA one equipped with 3.3:1 Powerlock differential

The vendor now considers the bodywork, paintwork, interior trim, engine and transmission to all be in "excellent" order and informs us that 'WSL 454' has been regularly maintained during the 8,800 miles covered since the restoration and currently requires no work to be done. The Jaguar's MOT is valid into April of next year.
Share: