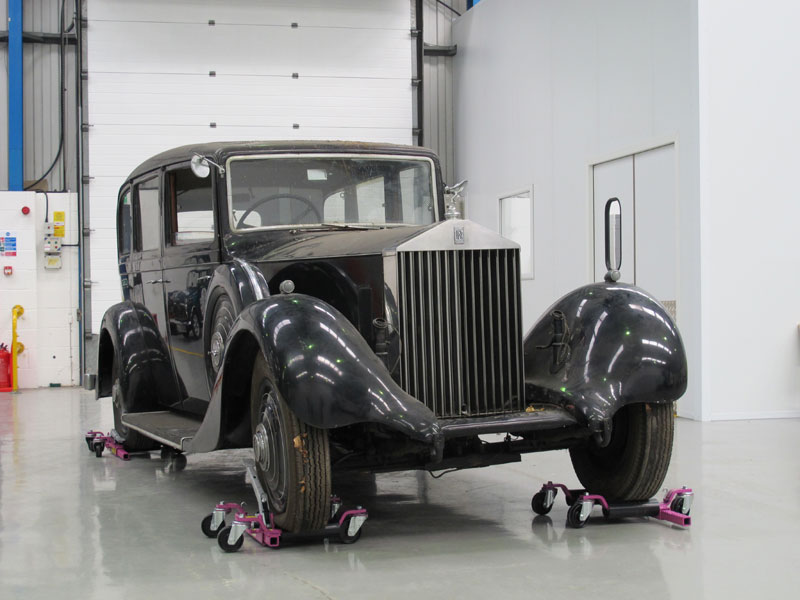 - Sold on behalf of the Sir Henry Royce Memorial Foundation

Bodied by Thrupp & Maberly as a Limousine (body number 6447 to design TC1136), this nicely proportioned 25/30 was bequeathed to The Sir Henry Royce Memorial Foundation by G.K. Kent Esq of Smethwick. First registered in London - or so its valid `DXX 744' number plate would imply - to Major G.A. Meakin, the Rolls-Royce is known to have belonged to Messrs Cridlands of Cardiff before entering Mr Kent's ownership during December 1964. Reportedly taken off the road some twenty-eight years ago due to engine trouble, the Limousine has remained garaged ever since. Inspecting the 25/30 in his capacity as a Rolls-Royce Enthusiasts' Club Valuation Officer, A.E. Fogg Esq produced a report which is paraphrased below: `It was found to be generally complete and in a reasonable state of preservation. The coachwork is sound but has probably undergone some repainting during its life. All seems remarkably sound with firm door action. The interior trim is in generally serviceable condition: the front seats being black leather with matching door panels. The rear compartment is trimmed in West of England-type cloth which is grubby but serviceable; the exceptions are wear to the armrests and signs of moth damage. The engine is incomplete, the rocker shaft, manifolding and carburettor being removed but present. The engine could not be turned with the original starting handle and is considered to be seized. The owner appears to have (or had someone) dismantle the engine and overhaul it with new pistons and a replacement cylinder head. For whatever reason the work was not completed and the car seems to have remained unattended for many years. Potentially a sound and quite original example of a late 1930s small horsepower limousine which has sturdy coachwork but requires serious engine work, tyres, exhaust and then full recommissioning (braking system, suspension, electrical component overhaul, wiring etc)'.
Share: