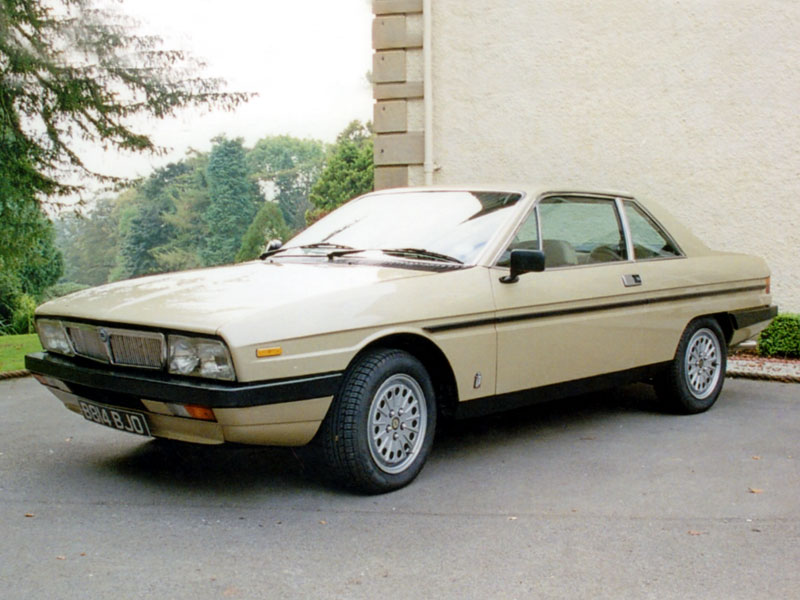 The Lancia Gamma replaced the Flavia as the company's flagship model and was launched at the 1976 Geneva Salon. Both the Saloon (Berlina) and Coupe were styled by Aldo Brovarone of Pininfarina. Power for the Gamma was provided by an all-alloy flat-four unit of either 2.0 or 2.5-litres capacity. The engine's inherent lack of height gave Brovarone free rein to create rakish looking bodies with low bonnet lines and steeply angled windscreens. The car's underpinnings were similar to that of its smaller sibling, the Beta - disc brakes all round and all independent suspension by MacPherson struts with coil springs and anti-roll bars. Changes were relatively few during the six years of production and largely confined to the facelift model of 1980 that comprised: a move from carburettors to fuel injection for the engines; a new radiator grille and 15-inch `sunburst' alloy wheels. At the same time the interior was upgraded and treated to new instrumentation and lighting. While the Gamma Saloons were built at Lancia's Chivasso factory, the Coupes were manufactured on Pininfarina's prestigious premises at the rate of up to 10 per day. Some 6,789 examples were built by the time production ceased in 1984.

The sale car is a right-hand drive 2.5-litre Gamma Coupe. Not registered until 1985, it must have been among the last examples produced and was ordered with the optional four-speed automatic transmission. The vendor acquired this very smartly-presented Italian classic in 2006 when 38,000 miles were registered on the odometer (it now reads an unwarranted 45,750). The interior has been upgraded and improved - the front seats have been repadded and the facia professionally retrimmed with anodised aluminium and wood veneer. The steering wheel has also been given the veneer treatment. The bonnet was repainted some two years ago and the battery replaced in recent months. New, correct pattern tyres have also been fitted and the vendor currently considers the Gamma's bodywork, Gold-coloured paintwork and transmission to be "excellent" and the engine and original Beige cloth trim to be "very good". He is now selling `B814 BJO' complete with some spare parts, history file including invoices etc, and MOT valid until the end of February next year.
Share: