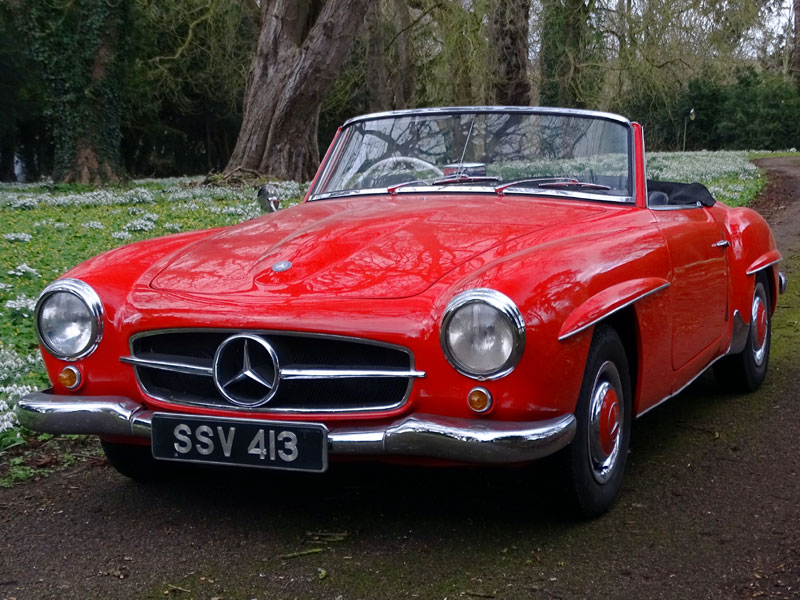 The 190SL was introduced in 1955 - the year Mercedes swept all before it on the Mille Miglia with the 300SLR. Indeed, the graceful, new two-door, convertible grand tourer was sold alongside the road-going version of the SLR - the 300SL - whose styling it strongly resembled. In fact, the underpinnings of the two cars were quite different and, while the 300SL had a purpose-built tubular spaceframe (W198), its smaller sibling was built on a shortened version of the 'Ponton' saloon (W121) platform, which was of monocoque construction. The 190SL also boasted an all-new engine - an over-square SOHC straight-four unit of 1897cc that produced some 120bhp, which was sufficient to propel the car to a maximum speed of 112mph. The engine was coupled to a manual four-speed gearbox. The suspension comprised double wishbones and coil springs at the front and a coil-sprung swing axle at the rear. Steering was by recirculating ball and braking by power-assisted drums all round. Built to the highest standards and among the quickest comparable cars of the time, the 190SL featured a well-appointed cockpit, notable comfort for its occupants and relatively generous luggage space. Under the circumstances, even the steep asking price of £2,693 did nothing to deter purchasers. Options included a third seat placed transversely behind the front ones which was big enough to carry an adult. The 190SL continued in production until 1963, when both it and the 300SL were replaced by the 230SL (W113). By this time some 25,881 190SLs had been produced (just over two percent of which were to right-hand drive specification).

One of just 562 190SLs built to right-hand drive specification, this particular example - chassis number 23629 - has been UK registered since August 1st 1976. Retained by its previous keeper, George Fisher Esq., for twenty-four years (1990-2014), the Mercedes-Benz was resident in both Scotland and Southern Spain during that time. Inspected by T&T Technical Services of Edinburgh during October 1995 on Mr Fisher's behalf, their report read as follows: 'The bodywork of the vehicle was found to be in first class condition with no evidence of excessive corrosion or perforation. We were unable to detect any extensive repairs which had been carried out to the bodywork and, in our opinion, it would appear that this vehicle is totally original and in as near perfect condition as is possible for a vehicle of this age. The paintwork was also in very good condition although it had, at some time in the past, been re-sprayed but to a very high standard . . . Apart from a slight oil leak from the rear of the engine the mechanical components and vehicle undercarriage were in original and undamaged condition. It is our opinion that this vehicle is as near original as it is possible for a vehicle of this type to be and from all accounts it appears to be totally original and has not been restored'. Doubtless aided by its sojourn in sunnier climes, the 190SL remains highly presentable some twenty-two years later. Entering the current ownership during 2014, the Mercedes-Benz has since benefited from the addition of twin Weber 40 DCOE carburettors (though, the original Solex ones have been retained should a new owner wish to reinstate them). Decidedly rare in right-hand drive guise, this stylish 190SL is offered for sale with owner's manual (1968 reprint), sundry paperwork, the aforementioned T&T Technical Services report and MOT certificate valid until 22nd November 2017.