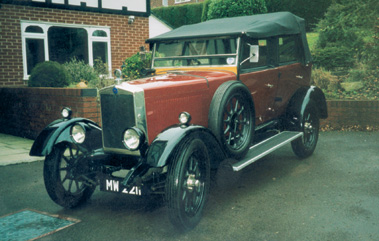 Morris Motors of Cowley were one of the major players of the British motor industry in the prewar years. When annual production rose to 54,000 cars in 1925, Morris had a 41 per cent market share and were the UK's number one car maker.
The 1928-made Cowley tourer offered here is believed to have been one family owned until 1995 and served as a weddings car in the Inverness area for the last three years. The open 4-seater bodywork, painted maroon with black wings, is said still to be in as-restored condition from having much refurbishment work carried out in 1995. The interior is in tan tex and the all-black weather equipment, which is all present and correct, has clearly been renewed.
Two years ago, further work included having head gasket, hoses and carburettor renewed, magneto overhauled and a new fuel tank fitted. According to the entrant, just two turns of the starting handle is enough to start the 1479cc 4-cylinder motor which, he says, runs and sounds very sweet.
The MW 2211 registration present today is claimed to be the original issued to the vehicle in 1928. The around 55,000 miles displayed when entered for this sale is believed by the vendor to be the genuine total mileage from new. The MOT test certificate is current until next February. The overall condition is described as being very nice and the car will be raring to go places in the spring.
Share: