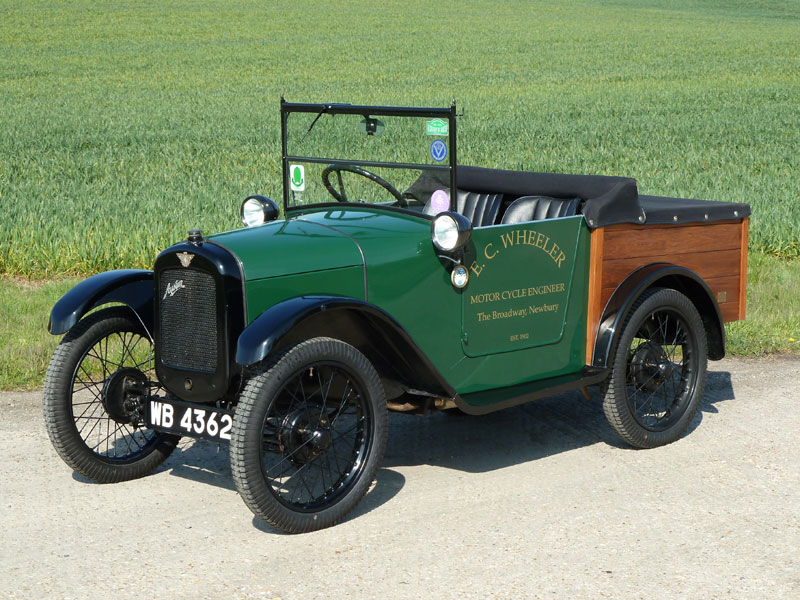 Apparently inspired by the Peugeot Quadrilette, the now immortal Austin Seven was announced in 1922. It is amazing to think that its tiny splash-lubricated 696cc (soon increased to 747cc) engine was the design of an 18-year old draughtsman called Stanley Edge, and the Seven immediately became the smallest four cylinder-engined car on the British market. It featured four-wheel brakes, suspension by semi-elliptic transverse spring at the front, quarter elliptic units at the rear and steering was by a worm and wheel system. The Seven remained in production from 1922 until 1939, during which time some 290,000 were produced.

It was in Chummy guise that the model is perhaps best remembered, and the charming Green and Black Pick-Up offered was apparently created as a Chummy-style hybrid from a selection of Austin Seven parts by an enthusiast in memory of his late brother. The vendor informs us that, in the process, the chassis and engine were married to items relating to a different Seven, registration number 'WB 4362', as a result of which the numbers on the car currently differ from those on the V5C. The chassis, radiator grille, Van floor, gearbox, back axle and windscreen are understood to be original, while the wings and doors were newly constructed. The restored chassis was exhibited on the Midland Austin 7 Club stand at the NEC Classic Car Show c.2003. The Pick-Up body was then built by K Moore of Shirley and the completed vehicle displayed at Goodwood House in 2010. We understand the engine has been fitted with a larger (1 5/16th inch) crankshaft and features an extended oil filler neck, while the starter motor was recently overhauled and new Blockley tyres fitted in August 2010. The little Austin comes complete with hood and side-screens and is expected to have a fresh MOT by the time of the sale.
Share: