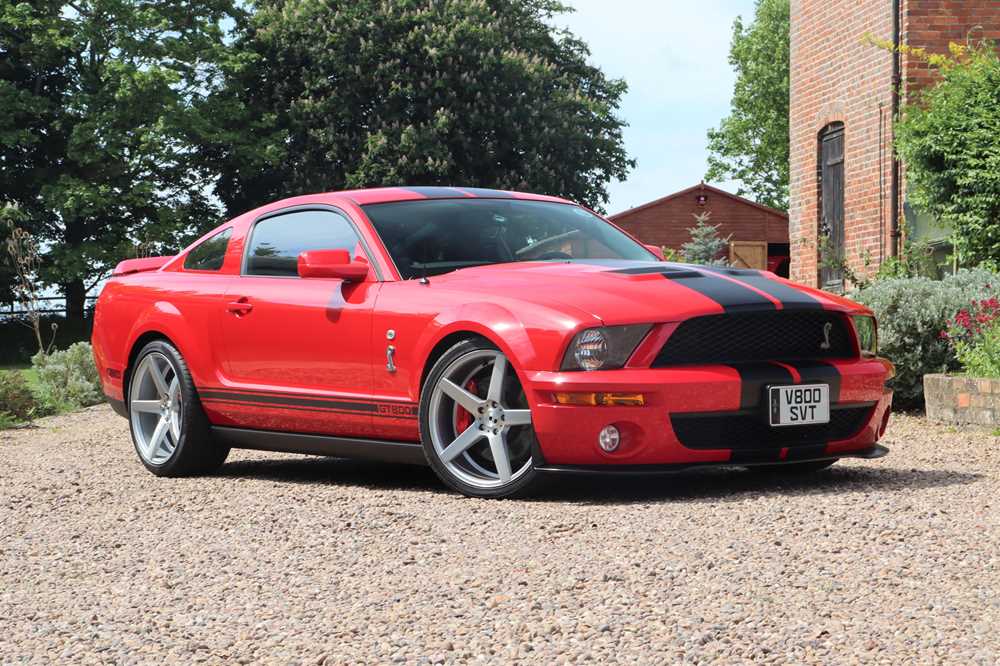 Produced by the SVT Special Vehicle Team (SVT) an arm of the Ford Motor Company, responsible for the development of the company's highest-performance vehicles. SVT produced specially built Shelby badged Ford Mustangs with high performance. First registered in the UK in 2006, offered here is a rare Shelby GT500 version of the Ford Mustang from Ford's SVT department. Offered in Metallic Red with Black racing stripes and with 29,600 recorded miles and current ownership since 2012, the specification is vast and includes electric windows and mirrors, air conditioning, power steering, cruise control, traction control, ABS braking system, twin sports clutch and Brembo Red brakes. The 5.4 litre supercharged V8 engine is mated to 6 speed manual transmission which, along with described upgrades in the history file offers supercharged assisted horsepower reputed to be in excess of 700bhp.

'V800 SVT' has had ‘GT800’ decals added to reflect the suggested performance ability, as mentioned in the history file. The upgrades documented include Roush Performance suspension, JLT cold air induction, Whipple throttle body and custom Matt Black Gienelle 21" alloy wheels plus a new clutch in 2011 and undersealed in 2020. The in-car entertainment is from a Shaker 500, subwoofer and amp upgrade, AM/FM stereo and CD Multichanger. Accompanying this Shelby Mustang is an original owner's wallet along with handbooks and a well-stamped service book plus a collection of old MOT certificates. Last serviced in 2020 and said to be a 'well' maintained example 'V800 SVT' has a current MOT into April, 2023. A cherished and very relevant registration number ‘V800 SVT’ is offered with the car. A rare example on UK roads and with an evocative Ford V8 exhaust note from the Borla Stinger Twin exhaust upgrade to be enjoyed by a new owner!