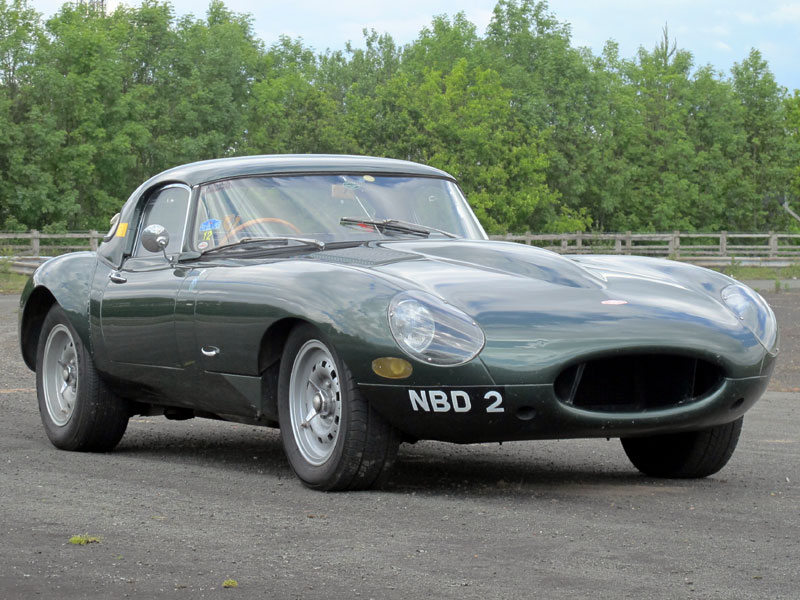 A serial Jaguar owner who had had the pleasure of piloting an ex-Ecurie Ecosse C-Type on the Mille Miglia Storica, the late Richard Colton commissioned `NBD 2' from Bryan Wingfield of DRL Engineering during summer 1991. A recognised master in his field, Wingfield's customer base at the time encompassed Francesco Scianna, Edward Harrison and Sir Anthony Bamford. One of only a few such `Lightweight' Roadster Evocations to be completed (some sources put the number as low as eight), it utilised a 1969 E-Type 2+2 donor car. The work of renowned specialist RS Panels, the re-born Jaguar's alloy monocoque was reinforced via the use of steel for its floor, front / rear bulkheads and internally braced sills not to mention a Safety Devices rollover bar.

Lighter yet stiffer than its production equivalent, the resultant bi-metal structure was fitted with uprated suspension (rose-jointed anti-roll bars, adjustable shock absorbers) and more efficient brakes (XJ6 callipers). Built by Dave Butcher, the 3.8 litre engine featured D-type camshafts and triple Weber carburettors etc. Reputed to develop 282bhp and 275lbft of torque, the straight-six was allied to a five-speed manual Getrag gearbox. Riding on correct-type `peg drive' alloy wheels and clad with alloy outer panels, `NBD 2' is understood to have weighed 23.3 cwt with a few gallons of fuel aboard. Visually distinguished from a factory `Lightweight' by its more steeply raked windscreen, the two-seater also boasted a properly lined hardtop, Parchment leather / Chiltern Tweed upholstery and full carpet / door trims so as to make it a more civilised companion on long, fast road trips.

Writing in the Jaguar Drivers' Club Newsletter (January 2007 issue), Richard Colton recalled that `The Wingfield Lightweight first moved on the road in August 1992. Since then it has covered many miles on the Continent, climbed all the major Alpine Rally passes, competed in the Rallye Pyrenees (x2), Prix des Alpes (x2), Rally Atlantique, Carrera d'Espagne, Euroclassic (x3), RAC Haynes Two-Days (x2) and Entente Cordiale (x3). It has been driven on the circuits of Goodwood, Silverstone, Castle Coombe, Snetterton, Thruxton, Zandvoort, Zolder, Nurburgring, Hockenheim, Clermont Ferrand, Montlhery, Chimay, Reims, Spa Francorchamps, Brno, Budapest, Mas du Clos and has ascended the hills of Prescott, Shelsey, Loton and Wiscombe. After all that it still feels as good as ever including when it recorded 143.6mph for the standing mile at the 2005 Woodbridge Speed Trials'.

Thought to have covered some 25,000 miles since completion, `NBD 2' possesses an MOT certificate valid until August 2016 but would doubtless benefit from a thorough service / checkover before attempting another Speed Trial. Great fun to drive, it has been estimated that this handsome `Lightweight' Roadster Evocation would cost circa £150,000 to replicate today. Offered for sale with V5C Registration Document and history file.
Share: