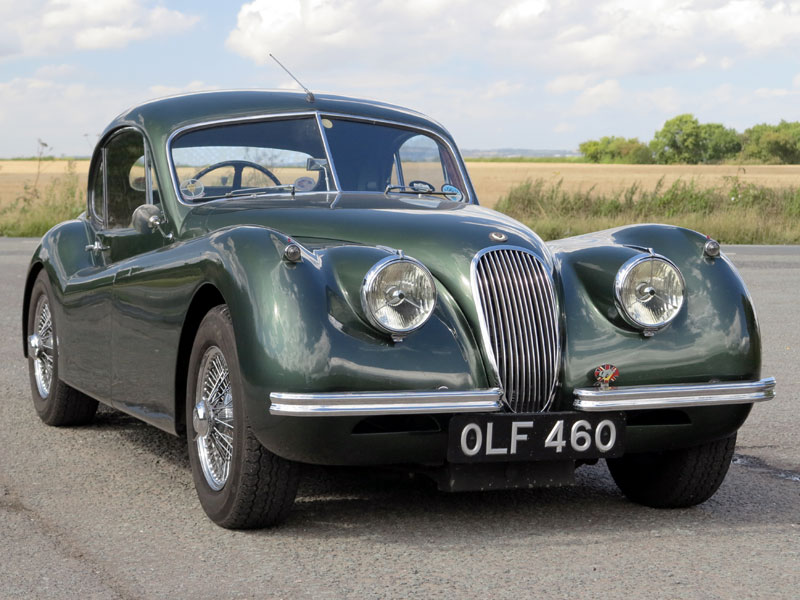 1 of just 195 XK120 Fixed Head Coupes built to right-hand drive specification, chassis 669108 was supplied new via Henlys of London to the famous lady racing driver Miss P.M. Burt. Road registered as `OLF 460' on January 1st 1954, the Jaguar was among Patsy's first competition cars. Driven by her in a variety of sprints and hillclimbs, it continued to chase silverware in the hands of second owner Robert Rees Esq. Though, an accompanying RAC Engineer's Examination Report dated 26th October 1961, by which time the XK120 had covered an indicated 81,639 miles and was up for sale with Performance Cars Ltd of Brentford, suggests that such spirited early use had done it no harm.

Belonging to Donald Alan Clarke Esq. of Hampstead, London NW3 by May 1963 and still being MOT tested in the same locale five years later, `OLF 460' subsequently fell into disrepair. Having toyed with the idea of a Nigel Dawes' car (and indeed turned down a freshly completed example at £42,500), the late Richard Colton spent nigh on £80,000 acquiring chassis 669108 and having it transformed into his own version of an uprated XK120 Fixed Head Coupe. Overseen by Michael Stewart of Stewart's Classic Motors (who had achieved numerous concours wins with his own XK120 OTS), the project took a year to complete (1996-1997).

Responsible for refurbishing the chassis and body, John Brown of Leaping Cats relocated the engine / gearbox mounts so that rack and pinion steering and a tubed XK140-type radiator with `closed circuit' cooling could be fitted. The suspension was enhanced via Leda telescopic rear shock absorbers, competition springs, one-inch diameter torsion bars and a stiffer anti-roll bar, while the brakes and rear axle were upgraded with four-wheel discs and a limited slip differential respectively. Aside from a Monza-style fuel filler and reprofiled arches (the latter necessitated by the presence of larger 15 x 6J wire wheels), Richard Colton wanted onlookers to be unaware of `all the goodies under the skin!'

Ever keen to increase his driving pleasure, Richard Colton commissioned Keith Fell of HRG Classic Jaguar to install a Vicarage power steering kit and polybush the front suspension during autumn 2006. Sparingly used in more recent years, `OLF 460' is thought to have covered some 27,000 post-completion miles. Recommissioned during the past few months with a new SU fuel pump etc, it would doubtless benefit from a thorough service / checkover but sounds decidedly purposeful when running and does not want for performance!