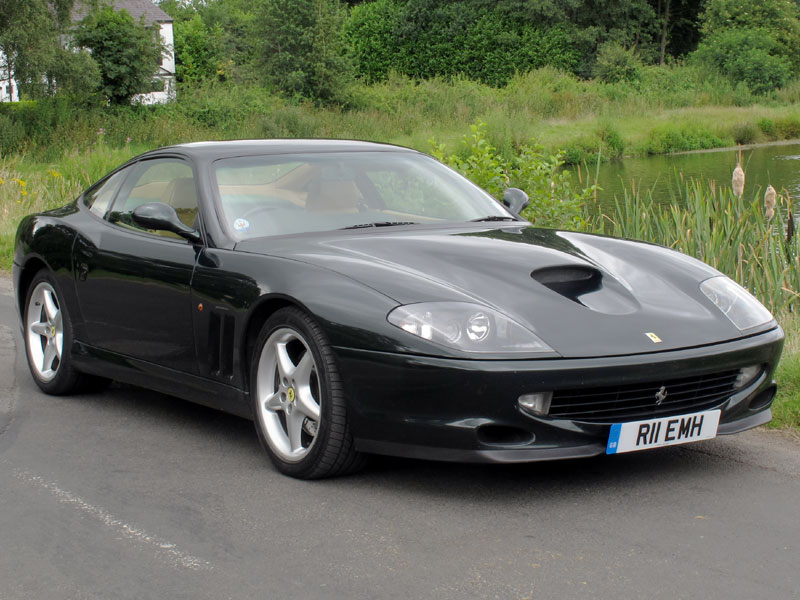 Ferrari's 550 Maranello was introduced as a replacement for the F512 M in 1996 and found much acclaim during its five years of production. It featured a 484bhp front-mounted naturally-aspirated 5.5 litre V12 engine driving the rear wheels through a transaxle - the six-speed manual gearbox being located at the rear for optimum weight distribution. Suspension was by double wishbone, coil springs and anti-roll bars all-round and the braking by ventilated discs front and rear. The Pininfarina designed all-alloy body was mounted on a tubular steel chassis. A pukka GT car out of the Daytona mould, it offered speeds of up to 199 mph coupled with the ability to accelerate from 0-60mph in just 4.3 seconds - the sort of performance figures that wouldn't have disgraced an F1 car once upon a time. With a luxurious and roomy interior and a boot that accommodated at least a set of overnight bags (or a full set of golf clubs), this was the perfect car for dashing through Europe - Monte Carlo one weekend, Rome the next. It was replaced in 2001 by the 575M Maranello. Though not intended for use in motorsport, the 550 Maranello was nevertheless adopted for racing by a number of privateer teams, to good effect. 2003 was arguably the year of best results, with Prodrive winning the GTS class in the Le Mans 24-hour race and finishing second in the GTS class of the American Le Mans Series, and Scuderia Italia winning the FIA GT championship.

Finished in Verde Zeltweg with Tan leather upholstery, chassis 10242 was supplied new by Evans Halshaw of Birmingham to Ian Hetherington Esq. of Alderley Edge on January 1st 1998. Acquired by its second keeper, the late Richard Colton Esq., for £111,500 from renowned marque specialist DK Engineering on December 14th 1999, the Ferrari currently displays just 29,000 miles to its odometer. Seemingly maintained on a mileage rather than annual basis, accompanying paperwork suggests that the Ferrari has undergone the following:

Aside from some minor denting either side of the offside B-post and assorted stonechips, the 550 Maranello is in good cosmetic order. A delight to drive and increasingly recognised as one of the all time great front-engined GT cars, this low mileage, two owner example is offered for sale with the aforementioned paperwork, leather wallet / book pack, tool kit and MOT certificate valid until March 2016.

PLEASE NOTE: The battery on this lot recently failed causing damage to the airbag ECU. A new battery has been fitted and a correct-type replacement airbag ECU has been ordered which will be forwarded to the successful purchaser.
Share: