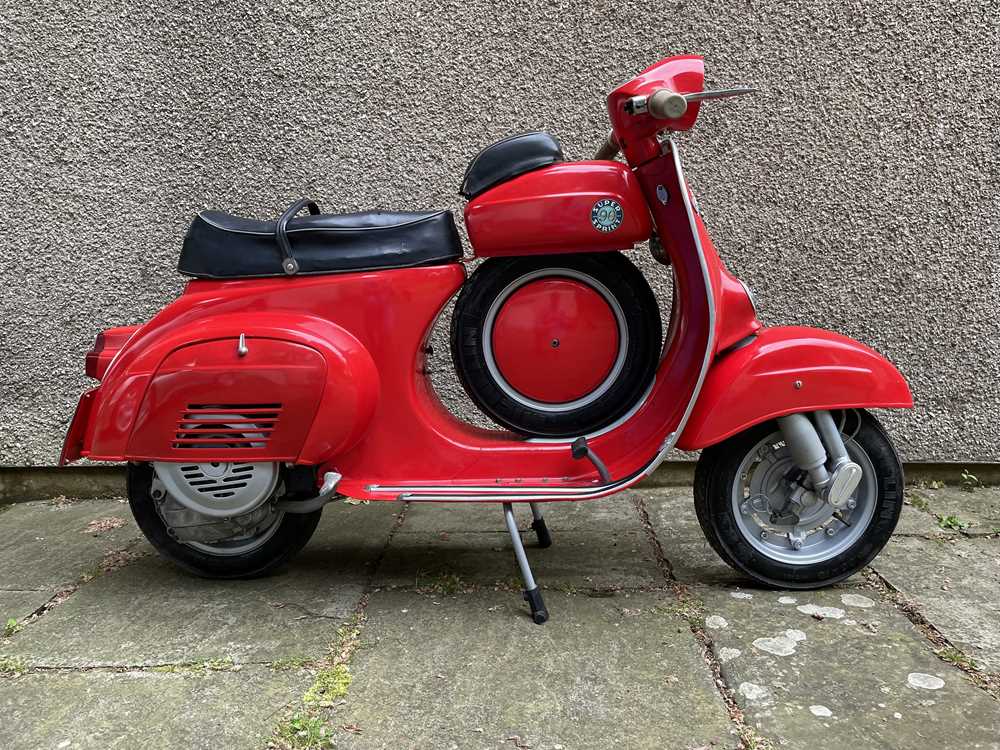 By the early 1960’s Vespa Douglas in Great Britain were importing Italian built Vespas as opposed to continuing to manufacture them. The Vespa SS90 made between 1965 and 1971 is much sought after by collectors due to its extreme rarity and only just over 5000 were produced. Most of these have been lost to the ravages of time and overly ambitious riders. The SS90 was developed as a sporting variant of the small frame Vespas. With a dummy fuel tank, a centrally located spare wheel, narrower more aerodynamic fairing and a pad on top of the dummy tank riders could crouch low behind the headlight to reduce drag at higher speeds. The two-stroke 88.5 cc engine used in the Super Sprint is a single-cylinder, air-cooled unit with a bore/stroke of 47/51 mm and an 8.7:1 compression ratio. It’s paired with a 4-speed gearbox, the dry weight is 77 kilograms, and the top speed is 93 km/h (58 MPH).

This SS90 with only 3 previous owners from new was previously owned by the late Bill Drake the legendary Vespa expert. The scooter has a nice 6 digit plate British registered from new. It comes with copies of the 2 previous registration documents with one referring to Bill Drake as the second owner of the scooter. (original copies will be supplied with the scooter). It has been restored in the correct Vespa red colour with the foresight of using the important and impossible to find original parts that were often never re-used.

All original parts include:

It is seldom that this most rare and sought after Vespa model, British registered from new, still with original parts comes around. It is an exceptional example. We expect significant interest in it.