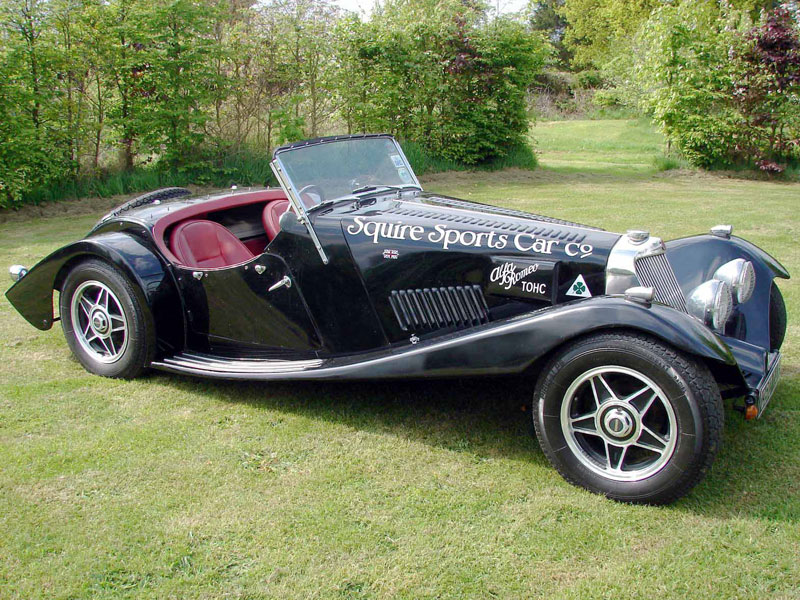 Adrian Morgan Squire formed the Squire Manufacturing Company in 1934. Based at Remenham Hill near Henley-on-Thames, the firm quickly produced a prototype of its planned Sports Roadster - a handsome two or four-seater based on a rigid chassis and bodied by Vanden Plas. Power was courtesy of the Anzani 1496cc twin-cam unit in either blown or normally aspirated form. The 100mph car quickly established a reputation for performance, but proved unable to compete on price, even when fitted with cheaper Markham of Reading bodywork. All too soon the company's working capital of £6,000 had been exhausted and the doors were closed in 1936 after the completion of just seven cars. The spares were bought by Val Zethrin, who reputedly assembled two or three more examples in Chislehurst. Clearly the Squire struck a chord with Phil Kennedy, who formed the Kennedy-Squire company in the mid '80s to produce a modern reincarnation of the model. The ladder chassis was topped by an ash/plywood frame clothed in aluminium. Power now emanated from a 2-litre, twin-cam Alfa Romeo unit coupled to five-speed manual transmission. While the new cars retained the general appearance of their predecessors, many aspects had been changed in the interest of comfort or safety. The front suspension was independent, while the disc/drum brakes were servo-assisted. Thanks to an all-up weight of just 17cwt, the 2-litre Alfa engine was sufficient to sprint the Squire to 60mph in around nine seconds. Production of the Kennedy-Squires was undertaken by the Vicarage Classic Car Co. of Stanmore Industrial Estate, Bridgnorth.

The black right-hand drive Squire being auctioned was made by Vicarage and first registered to them on May 1st 1989. Its Alfa engine was apparently tuned from new and is rumoured to develop around 165bhp. The V5 registration document shows one subsequent owner, who apparently used it for sprints and hillclimbs with backing from Vicarage, and the car still has 'Squire Sports Car Co.' signwritten on the bonnet, and 'Squire Hillclimb Special' engraved on the aluminium dashboard. Apparently the previous keeper purchased the car in 1994 but never registered it in his name. He assured the vendor that the odometer reading of circa 12,000 miles was genuine and described the Squire as being in "good overall" condition. Carefully recommissioned over the summer, the Squire is said to deliver "true open sports car motoring" accompanied by "very peppy performance" and "a lovely exhaust note". These cars reputedly took some 500 man-hours to build and are a unique blend of classic design and modern craftsmanship. A fun alternative to a Morgan, `Q610 YAW' is MOT'd until July 2011.

PLEASE NOTE: This vehicle has a tonneau cover, hood and two side screens. The headlamp units are Marchal.
Share: