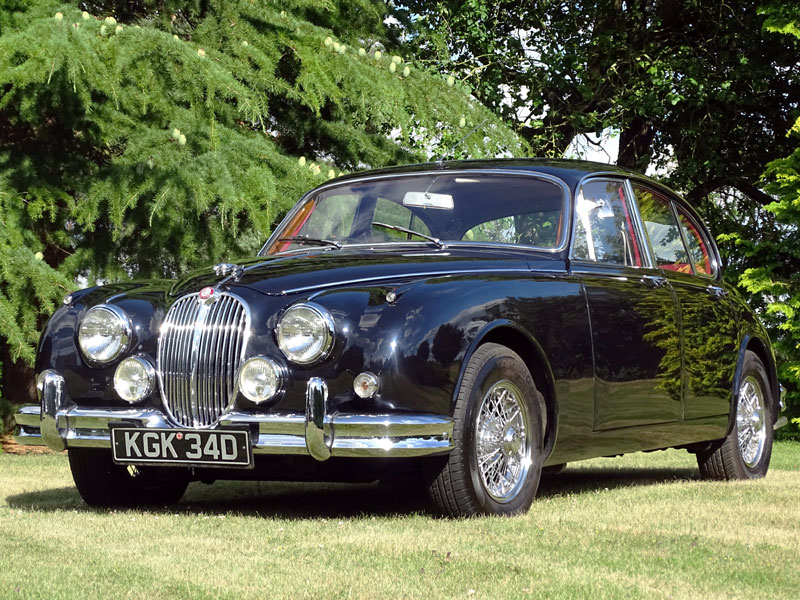 - Interior retrim by B.W Cates of Bournemouth and new wire wheels in 2012

- Offered with a collection of invoices, MOT's and photographs of the restoration

Featuring notably slimmer roof pillars than its MKI forebear, the immortal Jaguar MKII was as airy on the inside as it was elegant on the outside. Its monocoque bodyshell was equipped with independent coil-sprung front suspension and a well-located live rear axle, 12-inch disc brakes all round and recirculating ball steering. The model could be specified with a 2.4, 3.4 or 3.8-litre version of Jaguar's race-proved, DOHC inline, six-cylinder XK engine. The interior was quintessentially British with its sumptuous leather-covered seats, polished wood facia and door cappings, comprehensive instrumentation and impressive row of auxiliary toggle switches. The attention to detail and build quality of the MKII were remarkable for the price being asked (just £1,779 0s 10d including taxes even for the 3.8) - these cars punched above their weight. Equipped with the 220bhp 3.8-litre engine, the Jaguar was capable of sprinting to 60mph in as little as 8.5 seconds and on to a top speed of 125mph - small wonder that it was the first choice of both bank robbers and the police of the period! It was also extremely popular with the public, outselling its smaller-engined siblings, with 30,141 being produced between 1959 and 1967.

'KGK 34D' is a right-hand drive 1966 Jaguar MKII which left the factory as a 3.8 litre model fitted with the desirable four-speed manual plus overdrive gearbox. It was reportedly treated to an extensive restoration in 2008 that included a bare metal respray and overhaul of its replacement 3.4 litre MKII engine. Having received an interior retrim in 2012 by B.W Cates of Bournemouth and new wire wheels, the vendor now regards the bodywork, paintwork, trim, engine and gearbox as all being in "very good" order and is offering the Jaguar with a collection of invoices and old MOT's, photographs of the restoration and a current MOT certificate into July 2018.
Share: