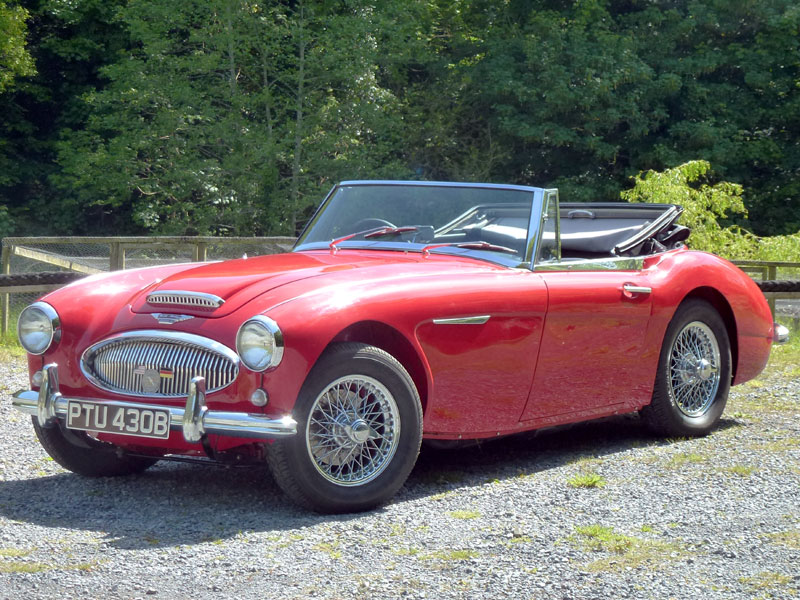 - Imported to England by the vendor and just 115 miles are reported to have been covered since the photographically documented restoration.

- Superbly presented underneath as well as on top, UK registered, over-drive equipped, and ready to be enjoyed


A significant step in terms of 'Big Healey' evolution and foundation block for one of the 1960s' most charismatic rally cars, the 3000 MKI was introduced in March 1959. Powered by an enlarged 2912cc version of BMC's C-Series straight-six engine that developed some 124bhp and 167lbft of torque, it could be had in two-seater (BN7) or 2+2 seater (BT7) configurations. Progressively improved, the 3000 metamorphosed through MKII and MKIIa guises before the arrival of the ultimate MKIII BJ8 in October 1963. Boasting a centre console, proper convertible hood, wood veneer dashboard, redesigned exhaust system and wind-up windows, the 2+2 seater BJ8 proved a comfortable and fast grand tourer. With engine output boosted to 148bhp and 165lbft of torque thanks to a new camshaft and better valve springs etc, its reputed 124mph top speed was accessed via a four-speed manual gearbox. Last of the line, the Phase Two variant benefited from redesigned rear suspension, strengthened splined hubs and larger diameter front disc brakes.

This example is believed to have been sold new in America and was imported into New Zealand at some point in its more recent life. A friend of the vendor restored the car for his own enjoyment and in doing so, transferred the steering wheel from the left side of the car to the right. Our vendor observed the rejuvenation of the car by his experienced friend and upon the completion of the work, he persuaded his friend to sell the car to him in February 2016. Our vendor is English but had resided in New Zealand for a few years, and when he moved back to England he brought the Healey with him and gained UK road-registration with the DVLA in October 2016. Described by the vendor as having an "excellent" engine and over-drive equipped transmission, body and paintwork, and black leather interior, the underside of the car is beautifully finished in body colour.
Share this page: