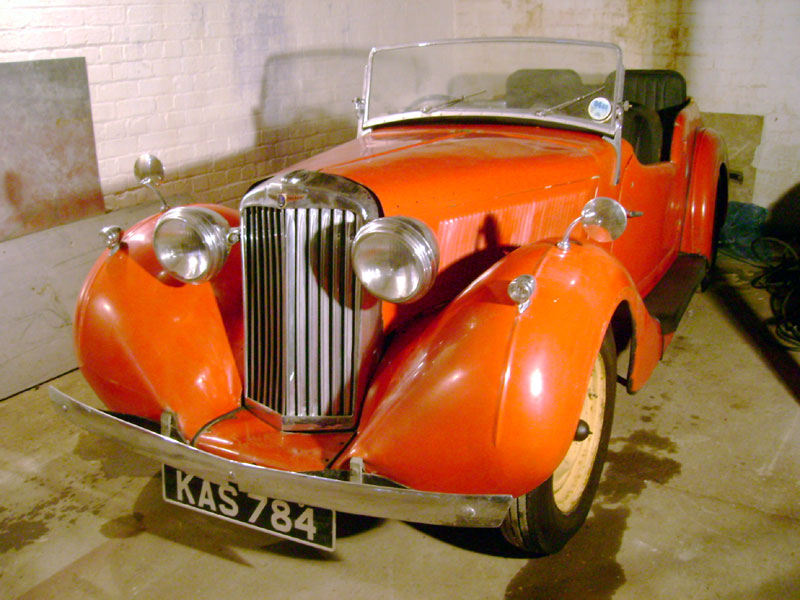 Like so many of its contemporaries, Sunbeam was a bicycle maker that evolved into a car manufacturer, and the Sunbeam Motor Company Ltd was created in 1905 to separate the two-wheel side of the business from the expanding four-wheel one. It survived with varying fortune until 1935, when the bankrupt remains were purchased by the Rootes brothers. From 1938, the products of the new regime were badged as Sunbeam-Talbots and the first of the new models was launched in August of that year. Dubbed the Ten, it was effectively a stylishly rebodied version of the Group's fast-selling Hillman Minx. Its chassis was based on that of the Hillman Aero Minx, while its engine was the sidevalve Minx unit of 1185cc topped by an alloy cylinder head. The gearbox was a four-speed manual unit and suspension was by semi-elliptic leaf springs all round. The newcomer was offered as a four-door Saloon, Drophead Coupe and four-seat Sports Tourer. Production of the Ten and other models was suspended during the war years and then revived until the arrival of the new 80 and 90 ranges in 1948. The Ten's 41bhp was sufficient to endow it with a top speed of a whisker under 70mph.

The right-hand drive Sunbeam-Talbot on offer is a model Ten Sports Tourer. Manufactured in 1948, it would have been one of the last of the line. It's been in the vendor's care since September 2003, during which time it has been dry stored. He tells us that prior to its lay up, the Sunbeam's engine was "running okay" and the gearbox was "working fine". Apparently the car has been rewired and the interior retrimmed in vinyl. We are informed the choke linkage is missing, a fuel filler neck is required for the rear wing and the number plate lamps are incorrectly positioned. Finished in Red with Black interior trim, 'KAS 784' is being sold without tax and MOT (the last one expired in 2004) and will require a degree of recommissioning before it can take to the road once more. The car comes complete with hood frame and a selection of spare parts.
Share: