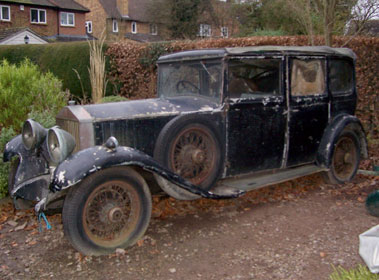 Launched in 1929, the 20/25hp followed established 'small' Rolls-Royce practice in that it was conceived and built to the same exacting standards as its larger Phantom II stablemate. Developed more or less side-by-side the two models shared improvements introduced during their respective series including thermostatically controlled radiator shutters and pedal operated chassis lubrication. Although, based around the same leaf-sprung, drum braked chassis design as its 20hp predecessor, the 20/25hp enjoyed notably sharper acceleration, a higher top speed and better fuel economy thanks to its enlarged 3669cc straight-six OHV engine. Available with synchromesh on third and fourth gear from 1932 onwards, the 20/25hp quickly drew praise form the contemporary press, Autocar noting that it had "great refinement of power, and a gentleness and quietness in doing its work, which makes results deceptive". Unlike its 25/30hp successor, the 20/25hp remained true to founder Henry Royce's perfectionist principles and distrust of bought-in components.

According to information kindly supplied by the Rolls-Royce Enthusiasts' Club, this particular example - chassis number GGP 52 - was supplied new via Rootes of Piccadilly to Dr Charles Francis Ind of Sittingbourne. Intriguingly, Dr Ind is understood to have insisted on a test run before allowing the 20/25hp to be dispatched to London coachbuilder Park Ward where it was bodied as a Salamanca (or Cabriolet de Ville). An unusual and expensive choice, Salamanca coachwork typically involved fixed side windows being combined with a full-length convertible roof (the latter often operated by means of an ingenious winding mechanism). Issued with the Kent County Council registration number 'KR 1550' on February 1st 1930, it is not known how long the 20/25hp remained in Dr Ind's possession. Relocating to Scotland at some point over the next sixteen years, chassis GGP 52 was selected from a fleet of Rolls-Royce hire cars to ferry former wartime Prime Minister Winston Churchill around Aberdeen during an official visit to the city on April 27th 1946. Accompanied by his wife Clementine and daughter Mary, Churchill had a packed itinerary that day. As well as being made a Freeman of the City and awarded a Doctor of Laws degree by Aberdeen University, the legendary leader - voted the 'Greatest Briton of all time' a few years ago - was invited to plant a tree commemorating his visit.

Doubtless chosen because its fully opening roof afforded the cheering crowds a clear glimpse of their hero (though, its Kent registration number may also have been a factor given Churchill's strong links to the county), the 20/25hp was captured on a contemporary newsreel film. The surviving black and white footage clearly shows 'KR 1550' driving along with its hood down and a broadly grinning Churchill standing in the back making his famous 'V for Victory' salute (visible too are the imposing P100 headlamps which remain on the car to this day). Still resident in Aberdeen after its fifteen minutes of fame had passed, the Rolls-Royce entered the current family ownership on 9th July 1953; the same year in which Her Majesty the Queen bestowed a knighthood upon Churchill. Brought to first London and then Buckinghamshire by the vendor's late husband, chassis GGP 52 was last on the road during the mid 1960s. Kept in a dry garage for several decades, the past eight years or so have seen the Rolls-Royce wheeled out into the garden but shielded from the elements by a multi-layered Cover Systems car cover. As a quick glance at its rusty wire wheels, peeling black paintwork and partially delaminated glass reveals, the 20/25hp is now very much a restoration project. The engine is seized (a state of affairs not helped by the removal of its spark plugs many years ago) but the aluminium bodywork looks to be free of any major knocks / dents and the brown leather upholstery to the rear passenger compartment appears salvageable.

Indeed with the obvious exception of its keys which have been missing for some time, 'KR 1550' would seem to be substantially complete and original. Any Rolls-Royce 20/25hp is a car worth saving but few can claim to have been in single family ownership for fifty-six years or to wear such rare coachwork. As to the value of its Churchill provenance well that it is for you to decide. A daunting but potentially rewarding restoration project that is being sold strictly as seen, chassis GGP 52 is accompanied by a Rolls-Royce 20/25hp handbook, Bill of Sale from Broomhill Garage, Aberdeen (dated 9th July 1953), continuation buff logbook, old MOT certificate (May 1961), expired tax disc (March 1965), current V5C Registration Document and short Scottish Screen Archive DVD covering Churchill's Aberdeen trip.
Share this page: