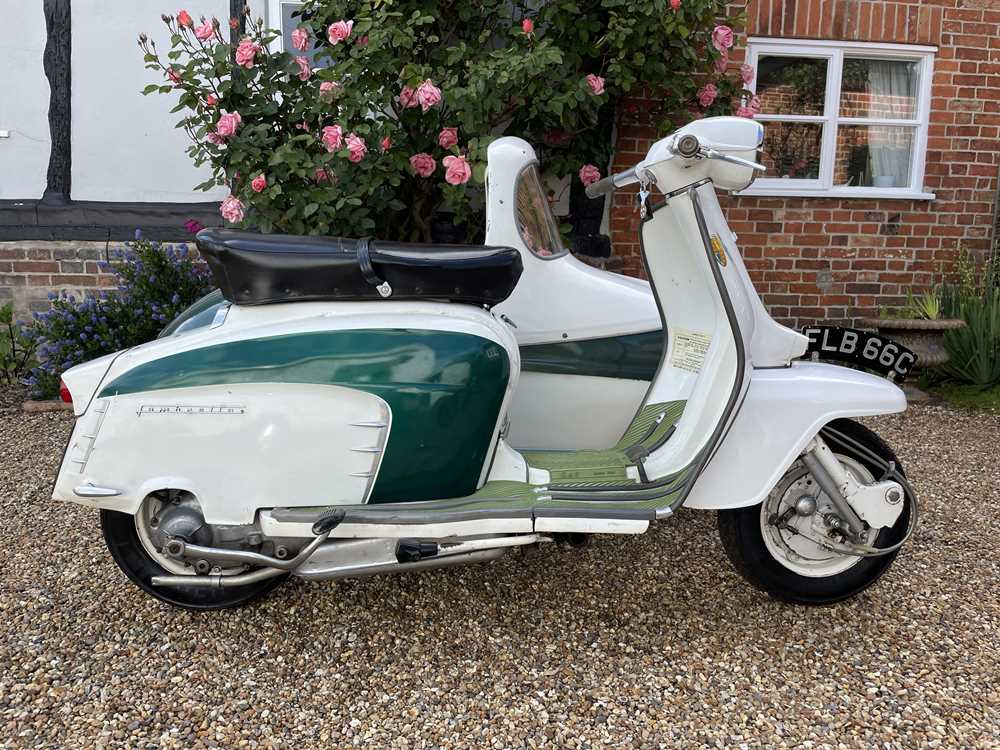 The Lambretta TV175 series 3 was launched in March 1962 and it was the first scooter supplied with an internal disc brake. It was a remarkable change from the previous TV175 series 2 with new sleek slim styling. The TV series 3 also had larger silent blocks than the previous engines and it had a very good reputation as a smooth and well-balanced scooter with great handling attributes. The larger engined TV200 quickly followed in early 1963 at the specific request of the British importer Lambretta Concessionaires who wanted an even more powerful model to satisfy their customer base. Genuine TV200 Lambrettas were instantly recognised as the GT200 to differentiate them from the TV175 models.

This original late example of a genuine GT200 combination was registered new on May 3rd 1965 by Raymond Way Motors of Willesden Lane London. She was then sold to a Mr Charles Frank Colston of RAF Bovingdon on the 9th June 1965 who then transferred ownership to himself at a Hemel Hempstead address on 12th May 1966. It is our understanding that she was taken off the road in 1967 and dry stored until 1990 when she was offered out of the blue by telephone to Derek Askill of Gran Sport Scooters with only 4842 miles on the speedometer, who has corroborated this. In that time she disappeared from the DVLA register and was issued with a replacement registration number. At Gran Sport she was simply cleaned being in no need of any major mechanical work. She was then bought by Nigel Cox at the famous Weston Lambretta Museum where she was on display for 24 years until its closure. She was then sold to collector Paul Brown who in 2014 was able to get the original registration number back from the DVLA by proof of the original log book. In 2016 she was sold to the current owner who has seldom used the scooter.

As far as purity is concerned a GT200 stated as that on the first buff log book (as opposed to TV200) and with fibreglass mudguard in such original untouched condition is as good as it is possible to get. Sold from new with a sidecar with the history file that comes with this scooter that documents all of the ownership changes. The MOT’s from 2014 when she left the museum continue to corroborate the mileage. The Watsonian Bambini sidecar is also in its complete with perfect condition hood and in original state with its original log book with serial number, instructions and guarantee. It is possibly the best original example of a Bambini sidecar one is likely to see. It still retains the pin stripe lettering and original factory transfers. The sidecar seat upholstery is in fine conditions as is its rubber floor mat. The sidecar also has its original wheel disc, Watsonian wheel spinner and metal badge. There is also a valuation certificate to the sum of £20,000 provided by the Lambretta Club of Great Britain. The museum display plinth (stating wrong year) is also provided. There are tax discs from 1966 and 1967. Also included is the original 200TV instruction booklet and the original guarantee from Watsonian Sidecars. The sidecar also has a very rare spare hood frame and original unique canvas bag for this. She also comes with an original set of Lambretta roadside tools in a matching green Lambretta tool roll. There is an original GEV accessory period floor mat in green that was added during its time at the museum. This is in no way covering up any damage or corrosion on what is a perfect patina floor board. Our consultant was able to start the scooter on the third kick and after three years of non use. She appears to have had a new petrol tap and rear hub locking nut. Save for that she is original in every visible way including original 6 volt still on points and SH1/20 carburettor. She will need a new battery to assist the lights and a recommended carburettor clean but could be on the road within minutes. This 57 year old time warp is an amazing piece of Lambretta history and easily the best GT200 combination I have ever seen.