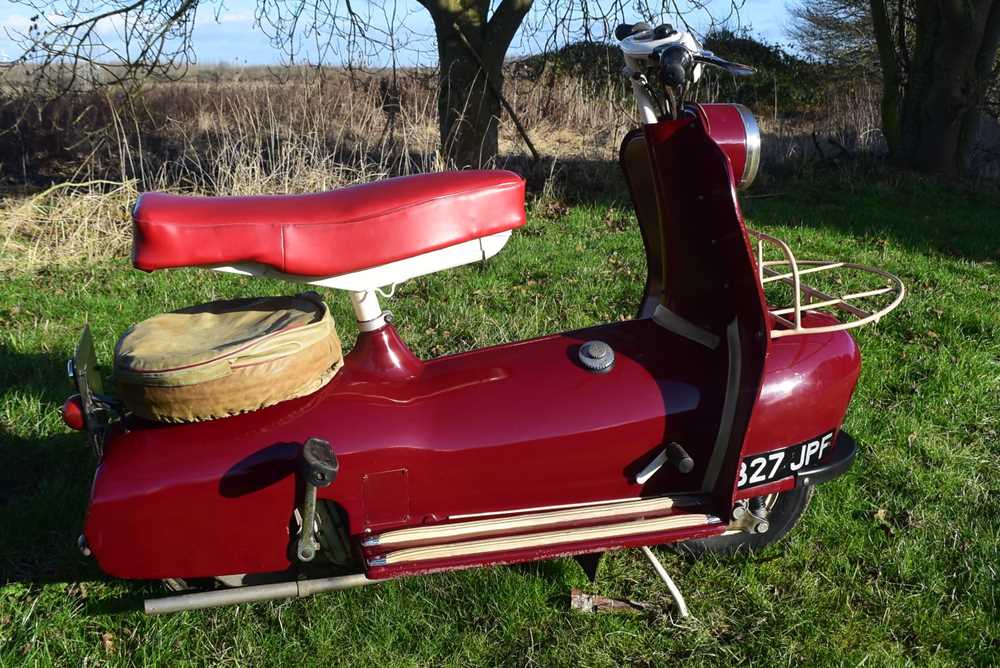 The Piatti scooter was designed by London based Italian engineer Vincenzo Piatti and first appeared at the Brussells Salon in 1952. It was initially produced in small quantities by the Belgian firm Les Anciens Establissements D'leteren who had a long history of building elegant coachwork on chassis from manufacturers such as Duesenburg, Hispano Suiza and Rolls Royce. In the UK, Cyclemaster, already famous for its engines to attach to bicycles took up the design and began production in 1956, contemporary adverts claiming the scooter to have 'the heart of a young lion and light as a feather' as well as being 'the scooter for tomorrow'. The design had a few unique features such as the adjustable seat and handlebar height as well as its distinctive cigar shape with a toolbox cleverly concealed in the seat base.

This 1959 example appears to have last been used over 46 years ago according to its tax disc and last MOT, dated 19th October 1975. This rare scooter comes together with an original buff log book showing it being first registered to a Mr Howdle of Leeds on 15 April 1959. The second owner appears on the log book in September 1963 before being bought by a Mr Laycock in May 1971, staying in the same family ownership since. The engine turns over and the gears select but it has not been run for a number of years so will need a good recommissioning before use but appears to be all there, including the front carrier and spare wheel in its cover. A very rare and standard looking part of British motorcycling history supplied with an original workshop manual, some period adverts, Wipac service information sheet, some correspondence from Cyclemaster/Britax and a current V5C.