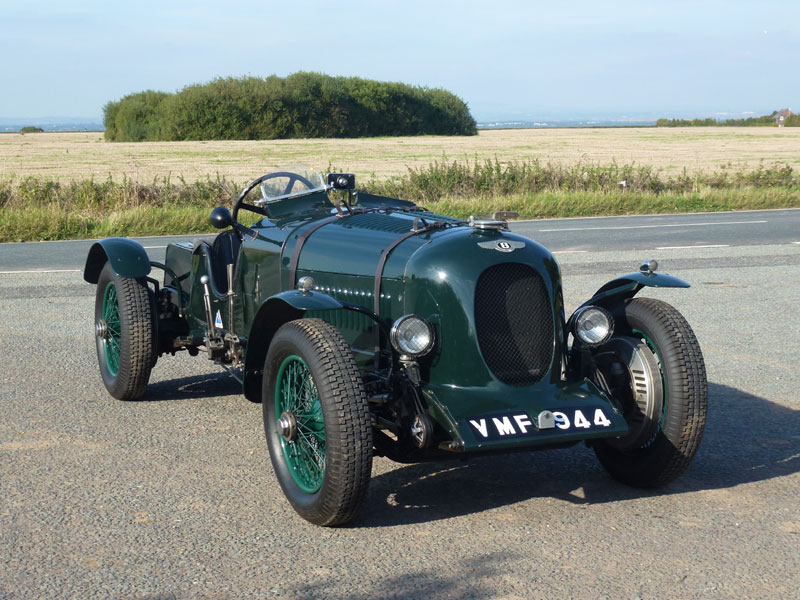 Syd Lawrence was a talented engineer whose apprenticeship with General Motors was disrupted by World War One. He subsequently worked for Bentley Motors under Nobby Clark and Anzani before setting-up on his own at premises in Southgate, North London. Well known in Bentley circles, Lawrence's workshop soon became a Mecca for those owners who had been previously struggling to keep their cars running on a diminishing stock of original parts.

'VMF 944' a.k.a. the 'Syd Lawrence Special' is believed to have been constructed between 1948 and 1950, using genuine pre-WW2 items from Syd's then held stock of W.O. Bentley spares. It is based on what certainly seems to be an original 3 litre chassis. The number stamped into the front engine cross member - 102/50ML - is Syd's own but the number stamped within the nearside front dumb iron resembles '708' and looks to be a Cricklewood factory marking (though, the final digit has been abraded). Chassis 708 was a Speed Model based on the 9ft 9.5in wheelbase (which the Special mirrors). Delivered new to J. Binning Esq. in July 1924, Clare Hay's authoritative tome 'Bentley - The Vintage Years' says of it: 'Last heard of 1946 . . . Rebuilt on new frame May 1930 after accident'.

Whatever their precise origins, Syd used the same number - namely '102/50ML' (1950 Modified Lawrence) - to identify his creation's chassis and engine when registering it with Middlesex County Council on May 1st 1950. Interestingly, Ray Roberts' book 'Bentley Specials and Special Bentleys' suggests that the lightweight two-seater's 4.5 Litre engine was originally numbered as 'KM 3088', while its 4.5 Litre steering box is stamped with 'KM 3089' (the number of the chassis which originally housed engine 'KM 3088'). Initially Green but later Battleship Grey, 'VMF 944' proved a fearsome competitor during the 1950s. Constantly developed by Lawrence who devised his own crankshaft and valvegear designs for it, the 3/4.5 Litre could reputedly rev to 5,000rpm and reach over 130mph. Assorted black and white photos on file show it racing at Goodwood, Silverstone, Boreham and Snetterton, achieving various podium placings along the way.

Sold by its creator for £5,000 in 1968 to fellow Londoner John Bertram Vickery, 'VMF 944' benefited from some £46,000 worth of overhauling / improvement works at the hands of marque specialists McKenzie Guppy during 1988-1990 before being sold to Brian Cook Esq some eight years later. Returning to the tracks with Cook, the Special placed third at Montlhery in 2000 and won the 'Con Martens Trophy' for the fastest lap recorded by a non-hybrid Vintage Bentley at the Bentley Drivers' Club's August 2003 Silverstone meeting. Campaigned by Neil Davies on behalf of next keeper Joanna Vassey including a strong finish in the Fox & Nicholl Trophy race at the VSCC's April 2005 Silverstone meeting, the 3/4.5 Litre was further improved by her successor David Dunn who enjoyed outings aboard it at Silverstone, Mondello Park and Phoenix Park.

A participant in the Irish Festival of Speed since entering the current ownership five years ago, 'VMF 944' has recently been inspected by Bentley aficionado and Benjafield's Club member Philip Strickland whose findings are outlined below:

ENGINE - It is fitted with a new 4.5 litre block. The exact date this was installed is not clear. With triple SU Carburettors, dinner-plate flywheel with ring gear, Borg and Beck clutch, coil ignition (which has replaced a twin magneto set up), ultra-lightweight starter motor (driven by a Varley racing battery), electric fuel pump in place of a pressure or Autovac system, lightweight aluminium radiator and alternator in place of the heavy Smiths dynamo, this engine was constructed for sheer performance, with high revs and good breathing paramount. It started well from cold, was not over noisy and showed a steady 22/24psi oil pressure. It ran cool on the short run we undertook in Dublin traffic. The engine pulled well in all gears with no hesitation or undue noise.

FRONT AXLE - The front axle appears to be original but I could not ascertain the number under the paintwork. Fitted with anti-tramp radius arms.

REAR AXLE - Rear axle banjo number could not be ascertained but it retained the 3 litre "bowler hat" filler cover still in place, a surprising retention on a race car. It was said to be fitted with a 3.53 axle ratio, but this could not be ascertained, although it felt to be so on test. Mounted on outboard springs set on fabricated outriggers.

WHEELS - Well based 19in wheels shod with various race covers. Wheels held in place by lightened locking rings that require a special tool to remove (car originally had standard two-ear Rudge Whitworth locking rings, but the replacements save weight)

BODYWORK - The body is, to say the least, of minimal proportions. Behind the seats is a flat box-like structure in which sits the Varley battery with room for a small bag. No hood or side screens but a tonneau cover. Dashboard sports an array of modern instruments and switches which do not appear out of place but are not period. Radiator is fully enclosed in a cowl, recently replaced by a replica in lightweight ally. Bonnet is in three panels, all separately removable. Outside four branch exhaust currently fitted with a proprietary parallel tube silencer. Car repainted after it left the hands of owner Brian Cook, and changed from Battleship Grey to British Racing Green. Externally it retains its original profile as built by Syd Lawrence.

DRIVING - I had a very brief run in traffic conditions, but was able to engage top gear, brake and accelerate rapidly. Steering, gearbox, clutch felt good in all areas but brakes need to be adjusted as the front drums were binding. Car was slightly skittish on the tyres with quite high pressures, but handled the bumps surprisingly well. No crashing of suspension. Oil pressure was around 12psi at tick over and increased to 22psi during run. Engine started well and was extremely lively, with little mechanical noise, apart from the loud rasp of the exhaust. It gave excellent acceleration and very strong pull from low revs. The ride was comfortable although exposed. Water temperature remained very cool. Gearbox was pleasant to use, modern clutch coped admirably.

OVERALL - This is a racing sports car. Its appeal is limited by its lack of practicality. It was designed for a purpose and was historically successful. Its appeal probably lies in its associations with Syd Lawrence and his great exploits which are well documented in a file that is to be sold with the car. Subsequently in various hands, it continued to gain success on the track. It has been well maintained and much has been spent on it over the years.

Among the more famous 3/4.5 Litre Specials, albeit one made from period parts by a renowned expert rather than a "matching numbers" example, 'VMF 944' possesses its own unique character and a well-known provenance.
Share: