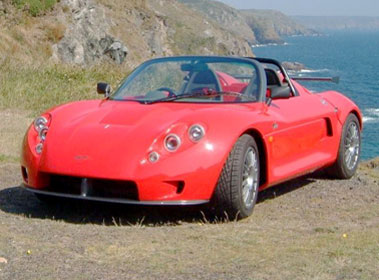 In many ways a twenty-first century version of the Lotus 7, the Strathcarron SC-5A deserved to succeed. Previewed at the 1999 Geneva Salon, its design and construction involved some of the most respected names in motorsport. Commissioned from Reynard and built by an aerospace specialist, the two-seater's aluminium honeycomb tub played host to Prodrive developed suspension (incorporating Bilstein springs / shock absorbers), AP Racing brakes and OZ wheels. Based on a Triumph motorcycle unit, its high-revving 1200cc engine was built-up / reconfigured by Ilmor so as to improve tractability. Credited with developing some 140bhp @ 9,800rpm, the four-pot was mated to a Quaife six-speed sequential gearbox (while, Hewland consulted on the final drive system). Suitably lightweight, the Strathcarron's dramatically sculpted bodywork incorporated a splitter up front and both a diffuser and spoiler to the rear. Tipping the scales at just 550kgs, the SC-5A allied startling performance (0-60mph in 5.5 seconds, 125mph top speed) to phenomenal roadholding. Yet for all the expertise surrounding the project, it was comprehensive stymied by changes made to the Single Vehicle Approval rules that were designed to stop motorcycle-engined cars circumventing emissions legislation. Unable to re-engineer the SC-5A in time, Strathcarron was forced to pull the plug. Thus, despite initial plans for an annual run of 150 cars just seventeen are thought to have been completed making survivors a real rarity.

Originally supplied to a private customer and first registered on March 1st 2002, this SC-5A has been part of a private collection for some years and has covered fewer than 1,400 miles since delivery. The eighth model produced, it also benefits from a SC-5 track car specification engine and rear wing and a gearbox with strengthened bearings (something of a weakness on early examples). Finished in red with dark grey interior, it is described by the vendor as being in "as new" condition and comes complete with V5C Registration Document and fresh MOT certificate. A rare opportunity to acquire a highly individual British sportscar that is equally effective on road or track.
Share: