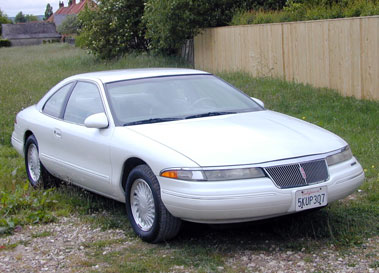 "With the new Mark VIII, there's once again an American luxury car that goes toe to toe with the rest of the world. This is as world-class as world class gets, yet as American as lemonade on a sizzling Fourth of July" (Motor Trend magazine, 1992)

Last of the Lincoln Mark Series line, the Mark VIII personal luxury sports coupe was introduced in late 1992 (for the 1993 model year). A quantum leap when compared to its aging predecessor, the newcomer nevertheless remained faithful to rear-wheel drive. Based around a two-door monocoque bodyshell, it boasted such advanced features as electronically controlled all-round independent air-spring suspension, anti-lock brakes and speed-sensitive power steering. Intended to compete with rivals such as the Cadillac Eldorado and Lexus SC400, the Lincoln was powered by an all-aluminium 4.6 litre DOHC V8 engine mated to four-speed automatic transmission (the latter incorporating electronic shift control). With a quoted 280bhp and 285lbft of torque on tap, Car and Driver magazine found a Mark VIII capable of 0-60mph in 6.8 seconds and over 130mph. Swamped by the luxury SUV sales revolution, the Mark VIII was phased out of production during the 1998 model year.

Finished in pearl white metallic with beige leather upholstery, this particular left-hand drive example was reportedly "imported from the sunshine state of California by only its second owner". Described by the vendor as "a wonderful vehicle" which allows its driver to "travel in individual style", 'K612 EMO' is also understood to benefit from "a full and comprehensive service history". Said to possess "a super smooth engine and autobox", occupants are apparently further cosseted by "ice cold air-conditioning, electric seats and a stereo". A very rare sight on UK roads, this super sleek Lincoln is offered for sale with MOT certificate valid until May 2008.

PLEASE NOTE: The new number plates for this vehicle are in the document office.
Share: