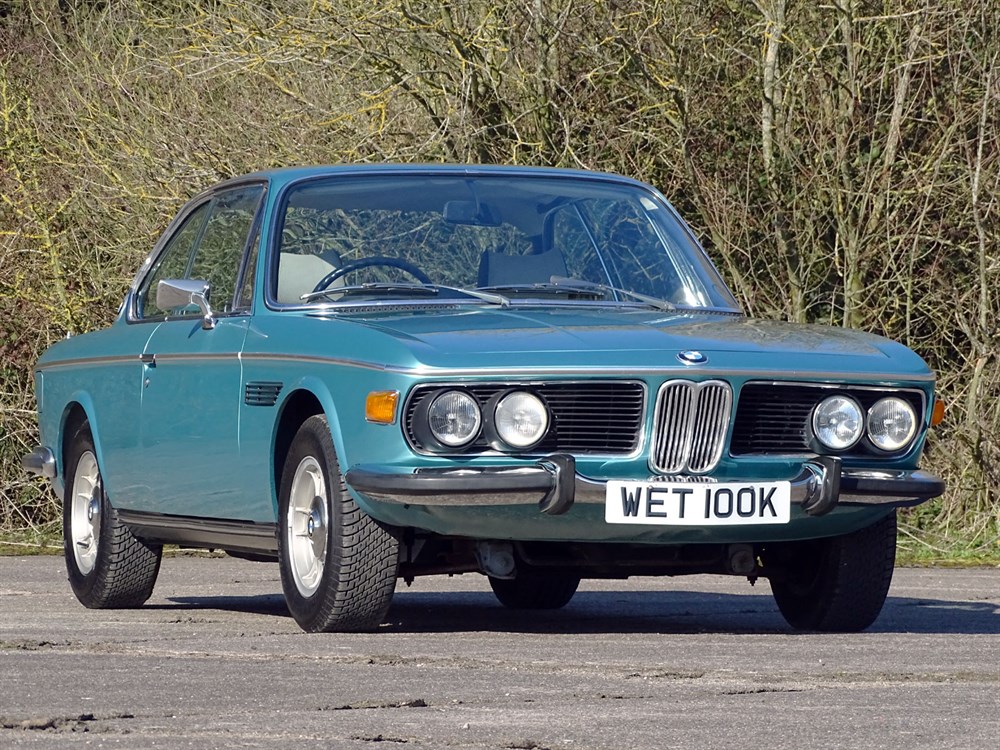 - Comprehensive bodywork and underside and mechanical restoration circa 1990s


This decidedly handsome matching numbers, UK right-hand drive CSi was registered new in the Isle of Man in 1974 before moving to the mainland a couple of years later, since which year it has remained within the same family ownership and been dry stored for the last 18. It was treated to a comprehensive body, underside and mechanical restoration during the 1990s, but retains its original seats, carpets, headlining, door cards dashboard, wood trim, steering wheel and lever for its manual five-speed gearbox. 'WET 100K' currently displays an unwarranted but eminently credible 43,000 miles from new. Finished in Metallic Blue and trimmed in Beige cloth, it has recently been equipped with a new battery and is being offered complete with its proper BMW tool kit.

BMW's so called 'New Class' compact Saloons and Coupes manufactured between 1962 and 1975 quite simply saved the company from extinction. Introduced in 1965, the 2000C and 2000CS Coupes featured distinctive-looking Karmann-built bodies and luxurious interiors and, having set a trend, were superseded in 1968 by the first of the E9 Coupes - the 2800CS. The length and wheelbase of the newcomer were extended to accommodate the 2788cc straight-six engine from the E3 Saloon, and the nose of the Karmann monocoque body was restyled to echo that of its four-door sibling. The 170bhp of the new, silky smooth powerplant was sufficient to propel the Coupe to 60mph in 8.5 seconds and on to a whisker under 130mph. The fully independent suspension was by MacPherson struts up front and semi-trailing arms at the rear. Braking was still by disc/drums and the steering by a power-assisted ball and nut system. The 2800CS was supplanted by the 3.0CS and 3.0CSi in 1971, for which the engine was bored out to give a capacity of 2986cc - in fuel-injected CSi guise, this produced 200bhp at 5,000rpm.
Share: