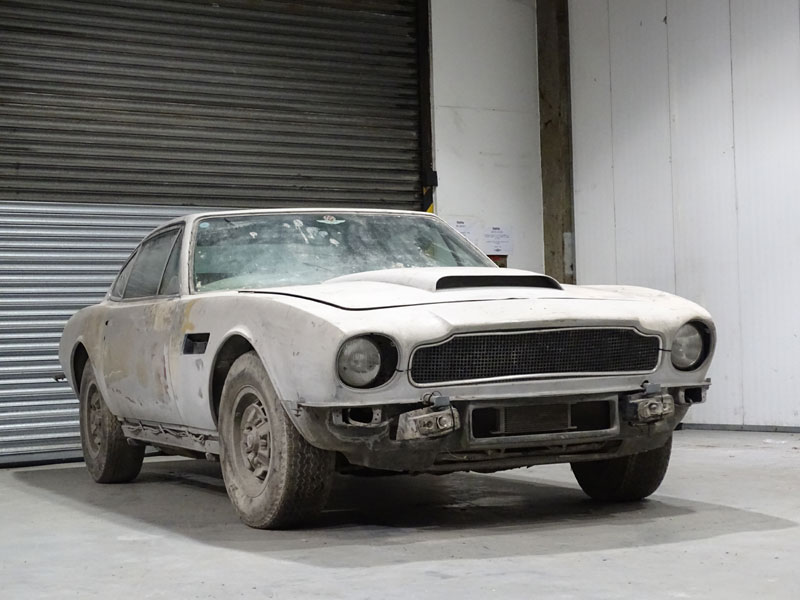 - Stalled restoration project that appears to be substantially complete

Aston Martin's long-awaited V8 finally appeared in 1969. It was initially known as the DBS V8, but later re-dubbed simply, 'V8'. Retrospectively known as the Series 3, the redesigned model phased-in during July 1973 was a response to concerns over forthcoming US emission control regulations. Marking a switch from Bosch fuel-injection to quad twin-choke 42mm Webers, the newcomer was visually distinguished by an enlarged air intake, elongated bonnet scoop and new rear window base panel. Believed to develop some 310bhp, its cleaner-running 5340cc DOHC V8 engine still made for a prodigiously fast motorcar. Indeed, the September 1973 issue of Autocar magazine recorded 0-60mph in 6.2 seconds and 146mph aboard a Series 3 with automatic transmission. In production from July 1973 to October 1978, a mere 967 Series 3 cars are thought to have been made.

According to its accompanying Heritage Certificate, this particular example was completed to right-hand drive, home market specification on October 5th 1973. Originally finished in Cosmic Fire Cambridge Blue with Burgundy leather trim, it was despatched to Lazenby Garages Ltd the following month. A letter on file from preceding keeper David Wadham-Smith Esq states that the Aston Martin benefited from an engine overhaul (78,509 miles), replacement automatic gearbox / torque converter (85,172 miles) and general fettling by marque specialist Ian Mason during his twenty-five year custodianship (1979-2004). Treated to new inner and outer sills plus a replacement stainless steel exhaust system and attention to its brakes during 2005, the V8 has sat in dry storage for the past decade or so. A stalled restoration project that nonetheless boasts its original engine and upholstery, 'ONR 4M' appears to be substantially complete with respect to its major components. Offered for sale with V5C Registration Document, instruction book (complete with service vouchers) and sundry paperwork, its odometer currently shows an unwarranted 86,759 miles.
Share this page: