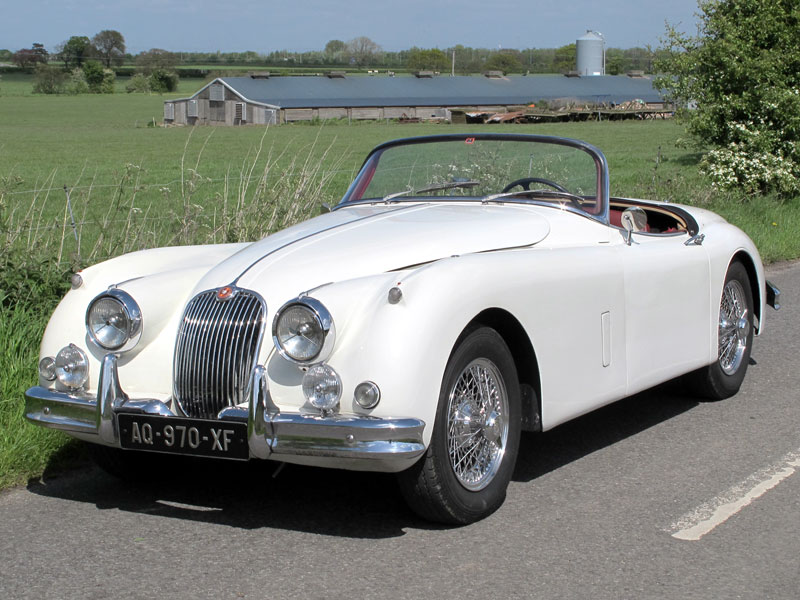 By the time the XK150 was launched in May 1957, Jaguar had already won Le Mans four times - what better platform on which to unveil a new model? Though the newcomer was a logical progression of the XK140 and the XK120 before it, subtle changes to the bodywork endowed this final iteration of the original XK line with a distinctly more contemporary air and generously proportioned cabin - the split windscreen was replaced with a single sweep of toughened glass, the waistline no longer dropped so deeply at the doors, the bonnet was widened and the bulkhead of the Roadster was moved rearwards by four inches in order to achieve a longer bonnet. The walnut of the XK140's facia gave way to one trimmed in leather.

The newcomer benefited from the adoption of servo-assisted Dunlop 12-inch disc brakes all round (in theory they were an option, but in practice no examples are believed to have been built with drum brakes). Over time, the XK150 could be had with a choice of 3.4-litre or 3.8-litre DOHC straight-six engines (various states of tune were offered - eg the Special Equipment 3.4-litre version was credited with 210bhp) allied to either four-speed manual or three-speed automatic transmission. Steering was by Alford & Alder rack and pinion and the suspension was much as for the XK140 apart from the replacement of lever arm dampers with Girling telescopic units. At launch the XK150 was offered in Fixed Head Coupe and Drophead Coupe guises, with the Roadster following in March 1958 - initially for export only. With production limited to just three years, the total number of Roadsters is considered to be just 2,265 cars - 2,173 left-hand drive and a mere 92 in right-hand drive form. As one would expect of a Browns Lane product, the performance was impressive compared with that of its rivals, and the standard 3.4-litre variant could achieve the 0-60mph sprint in 7.3 seconds and a terminal speed of 136mph. At the time of the model's UK launch in the October of 1958 such a version would have been priced at £1,939 including tax. The XK150 gave way to the immortal E-Type in 1961, thereby closing the door on the original XK line that had begun with the XK120 way back in 1948.

Finished in Old English White with Red leather upholstery, this particular left-hand drive example - chassis number S831137DN - departed the Browns Lane factory during August 1958. A Special Equipment model, its 3.4 litre engine is allied to four-speed manual plus overdrive transmission. The number stamped into both the cylinder block and head - V5071-8 - is the same one that appears on the car's chassis plate. The Jaguar is understood to have spent most of its life in America and was reputedly refurbished there circa ten years ago. Forming part of a Spanish collection thereafter, the two-seater entered the current ownership via the renowned French restorer Les Atelier des Coteaux. The car's history file contains a mass of receipts for repairs and upgrades totalling in excess of £30,000, including the cost of a recent interior retrim carried out in the UK. The vendor now classes the bodywork, engine and transmission as "excellent", the paintwork as "very good" and the interior as "new". He informs us that the Roadster is "extremely reliable, and recently completed the trip from Soissons to Biarritz and back with no problems whatsoever" - a total distance of around 1,100 miles. The XK is currently French registered.
Share this page: