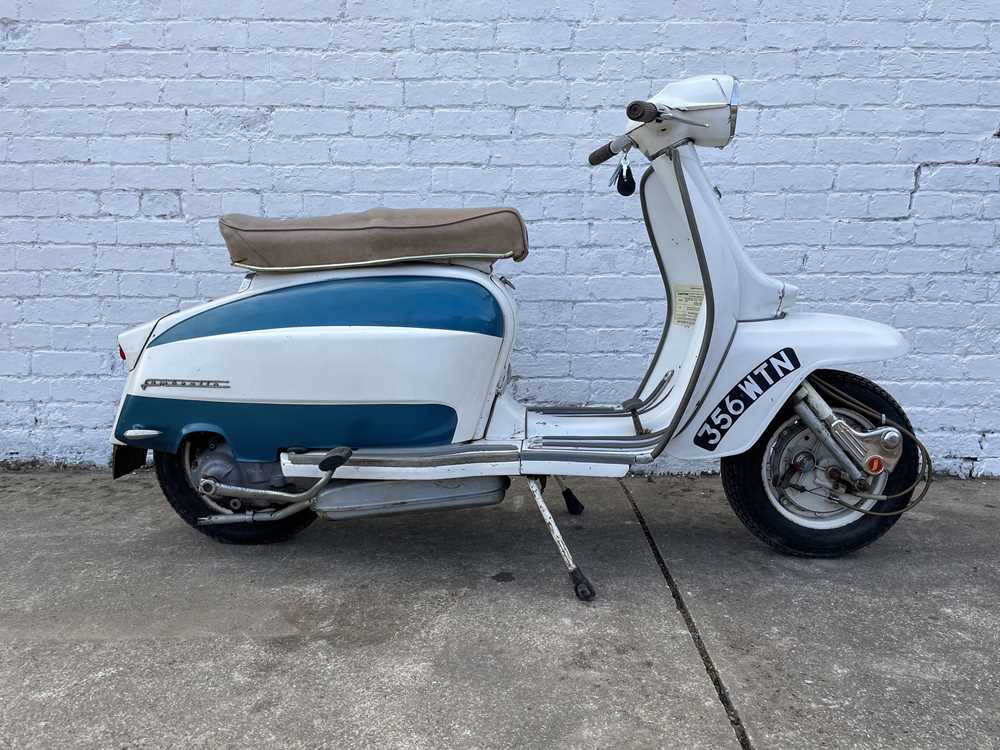 The Lambretta TV175 Series 3 was launched in March 1962 and it was the first scooter supplied with an internal disc brake. It was a remarkable change from the previous TV175 series 2 with new sleek slim styling. The front shock absorbers were enhanced with extra dampers as in the previous TV series 2 models. The TV series 3 also had larger silent blocks than the previous engines and it had a very good reputation as a smooth and well-balanced scooter with great handling attributes. The larger engined TV200 quickly followed the TV175 slim style in early 1963 at the specific request of the British importer Lambretta Concessionaires who wanted an even more powerful model than the TV175 to satisfy their customer base. Genuine TV200 Lambrettas were instantly recognised as the GT200 to differentiate them from the TV175 models. The first versions had Li style panels and the later versions had SX type panels with polished flashes.

This original early example of a genuine GT200 was sold new in Newcastle on July 2nd 1963 to a Mr Joseph Coates. She was then sold to a Mr Ian Warren on the 2nd November 1964 who we believe kept it until 2007 when it was acquired by a Jason Dornan on 19th September. On the 12th November 2010 it was sold to Colin Rowlinson who was an avid flag bearer for the GT200 model and indeed founder of the GT owners club which still exists today holding a register of all known GT200’s still in existence.

As far as purity is concerned a GT200 stated as that on the first buff log book (as opposed to TV200) and with fibreglass mudguard and a Pegasus seat from new and the whole scooter in such original untouched condition is as good as it is possible to get. The history file that comes with this scooter documents all of the ownership changes. It also comes with the old style driving license of the longest time custodian of the scooter and also with his driving lesson book. In the same envelope from the Newcastle vehicle licensing office is the very rare service voucher booklet that accompanied the scooter. There are tax discs from 1967, 2013 and 2015. Also included is the original 200TV instruction booklet and the original guarantee from Lambretta concessionaires. This is the best GT200 I have ever seen.