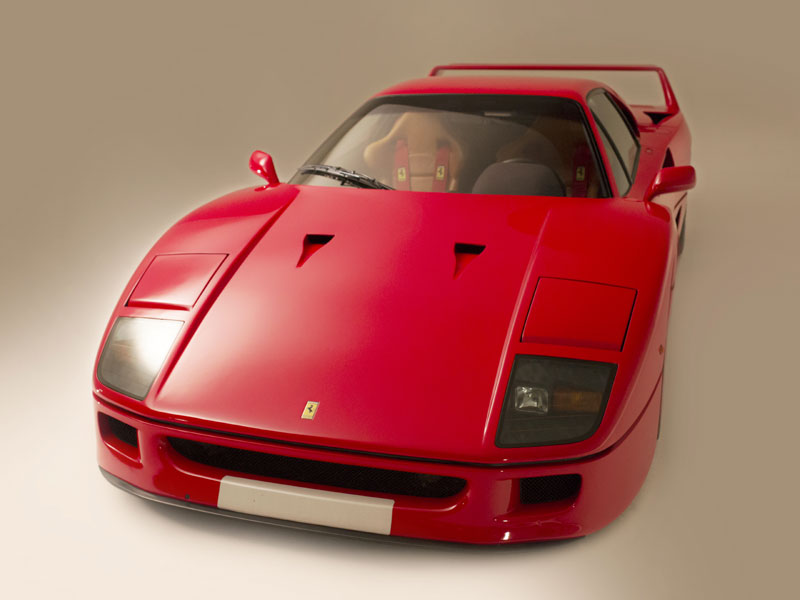 "When people ask me what the greatest thing I have ever driven is, the word F40 just falls out of my mouth. It's never Bugatti or Koenigsegg or Zonda. It's not even McLaren. It's just F40" (Andrew Frankel, Autocar, July 2009).

An automotive milestone, the F40 was not only the first production car capable of exceeding 200mph but also the last model to be personally overseen by Enzo Ferrari. Re-establishing the Maranello firm as the world's pre-eminent supercar manufacturer, the newcomer derived its name from a conversation between general manager Giovanni Razelli and one of Enzo's friends, Gino Rancati, during which the latter is reported to have said: "Since Ferrari's biggest market is the United States, and since it is now 40 years since the first Ferrari car has appeared, it should have an English-language name, for example Ferrari Forty". Capturing the public imagination in a way that few could have anticipated, the berlinetta remains one of Pininfarina's most iconic designs. Whilst the preceding 288 GTO could be mistaken by the uninitiated for a 308/328, the deceptively aerodynamic F40 (0.34cd) had its own, very distinct visual identity.

Based around a multi-tubular steel chassis clad with just eleven composite body panels (predominantly formed from Kevlar, carbon fibre and Nomex), Ferrari's mid-engined performance flagship boasted independent coil-over double wishbone suspension and cross-drilled / vented discs. Weighing in at just 1,100kg, the two-seater did without assistance for its steering or brakes. Powered by a twin-turbocharged 2.9-litre 'quad-cam' V8, developing some 478bhp and 425lbft, allied to five-speed manual transmission, the F40 was reputedly capable of 0-60mph in 3.8 seconds, 0-100mph in 7.6 seconds and 201.4mph. Like the Mercedes-Benz 300SL 'Gullwing' several generations before, demand for the F40 took Ferrari by surprise with production finally totalling 1,311.

One of just 58 catalyst-equipped, UK-supplied examples, chassis 091573 was specified with adjustable suspension and purchased new via Maranello Concessionaries Ltd by F.J. Connolly Esq. of the world renowned leather dynasty. Reputedly the only F40 to undergo a Ferrari-sanctioned re-trim in hide due to Mr Connolly's relationship with the factory as a supplier for its other models, the supercar was used for business as well as pleasure including one memorable trip to Mercedes-Benz's Sindelfingen design facility which saw it traverse Germany's Black Mountains in the snow! Acquired by the last of its three registered keepers in 2002, 'J702 FGN' benefits from an extensive service history:

Granted Ferrari Classiche certification in 2007, 'J702 FGN' is described by the vendor as being in 'first class overall' condition with regard to its engine, gearbox, electrical equipment, bodywork, paintwork and unique interior trim. Any F40 is a highly desirable machine but this bespoke Connolly car has the edge on many in terms of provenance.
Share: